The Pluto In Leo: Significance and Meaning

What does Pluto in Leo mean? These people love to live life the lavish way.

The Pluto In Leo: Personality

Because they love being in the spotlight, Leos are known for their instead gestures. That’s why Pluto in Leo revels in any challenge thrown their way. With their enormous ego, they love to show off their ability to overcome adversity. This helps them gain experience for future endeavors.

Pluto represents great change, spirituality, power, dominance, and stubbornness. Because they are so self-centered, they often focus on themselves when it comes to exploring hidden truths about the world. They tend to think about how things will affect them personally. This is what drives them to study things more in depth. 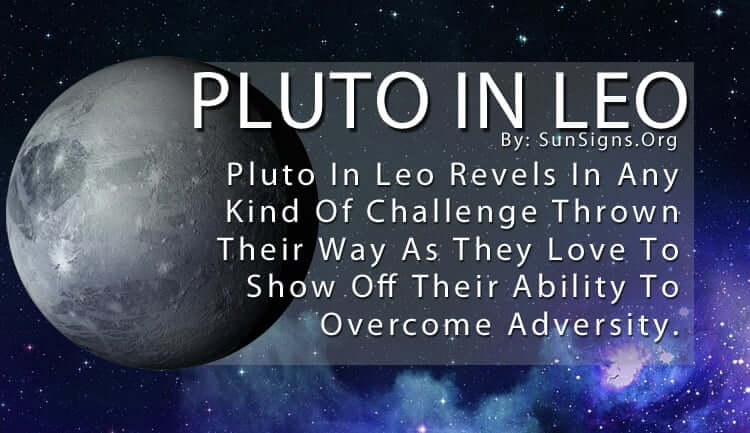 Positive Traits of the Pluto in Leo

The easiest thing for Pluto in Leo to do is reinvent themselves whenever need be. If they find themselves in a less than desirable situation, they can change and adapt in a way that is most advantageous to them. That’s also the best way for them to discover new traits and skills to continue on their quest for self-discovery.


The Leo Pluto zodiac sign people express themselves best in a creative setting for they love to go overboard whenever possible. Their glamorous attitude and approach to everything set them apart from the competition and keeps them in the spotlight, which is where they want to be. That’s the only way they know how to move forward and gain perspective on the world as a whole. (Find your Pluto sign).

Negative Traits of the Pluto in Leo

One thing Pluto in Leo has to be careful of is overstepping their bounds when it comes to leading projects or groups. They tend to automatically take over any situation because they are natural born leaders. But they don’t pay attention to whether or not someone has already taken on that role. So, their quest for control or power can be squashed before they even begin.


This does not bode well for them and the other people involved, because they have quite a temper. They have been known to throw a tantrum with their loud lion roar. They make a scene that disrupts the flow of everything going on around them.

They can handle change, but only when they are the one allowed to deal with it. If it’s left up to other people to reconcile the consequences, these people will have a hard time taking a back seat in terms of making decisions.

They are used to being the authority on everything and are unable to easily accept when someone else takes the reins or proves to be more knowledgeable. That’s the best way for them to remain at the forefront. (Know more about the symbolism of Pluto in your horoscope).

When it comes to their personal growth, the they are steps ahead of others because they are always looking to improve their station in life. But they need help from their large social circle if they are to extend that kind of attention toward other people.

While they are generous with their time and effort, it’s usually because they want people to hang out and do things with them. That’s how they flaunt their wealth and fame.

They sometimes have trouble seeing the bigger picture, and it takes the help of their social network to keep them focused on essential matters. Pluto in Leo would instead go out and play than stay in and work, and it takes a lot for them to settle down and do what’s best for everyone.