The Pluto In Aries: Significance and Meaning

What does it mean to have Pluto in Aries? They have all the means to put a new plan into action.


The Pluto In Aries: Personality

The brash Aries moves forward without wasting any time. Pluto in Aries waits for no one to tell them what to do. Their instant judgment and quick action don’t allow them to sit back and review the consequences. Thus they know what they want, and they’re going to get it.

Pluto symbolizes change, rebirth, spiritual growth, and the struggle for power. As part of this, Pluto includes the quest for truth and deeper meaning. That’s why Pluto in Aries is often in such a rush to find that one thing to enhance their life. They feel as if they have a higher calling. There’s always something bigger and better out there, and they have the bold and confident personality to seize it. 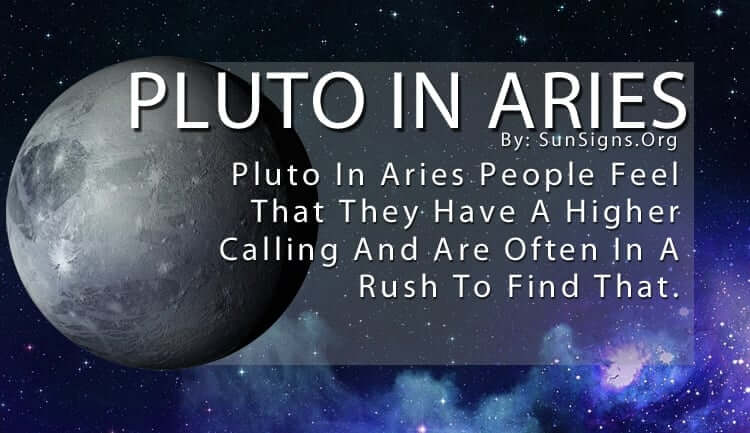 Positive Traits of the Pluto in Aries

Pluto in Aries is always on a quest for the truth. Whether it is about themselves or something or someone else in their life, they don’t let anyone get in the way of their journey. Their dedication and perseverance are admirable.

They have to learn to slow down and prioritize their efforts. After, this they can devise a strategy to complete their mission. That way they may not have to involve other people at all. The best trait of Aries Pluto zodiac sign is their optimism. And, this is what they should cling to when trying to reinvent themselves. Change can be scary, but they handle challenges very well.

But if they have the freedom to start something brand new, without a lot of rules and boundaries, their mind will soar to new heights. They are one of the best signs in the zodiac to think of a new project and get it off the ground as quickly as possible. (Get a free career horoscope reading).

Negative Traits of the Pluto in Aries

It’s rare when Pluto in Aries finds themselves in a rut. But when that happens, they struggle to break free from their monotonous routine and discover something deeper and more profound in their lives.

This search can be a good thing or a bad thing, depending on their mood. If they are looking to better themselves, they will find nothing but positive outcomes. However, if they go into the search in a state of depression, they can turn destructive.

This is where Aries in Pluto has to be careful because their quest can turn into a power play if they lose control over their feelings. They are not known for their patience. So, they can anger the wrong people if they begin stepping on toes. Know more about your Pluto sign.

The Pluto in Aries woman or man can also become careless with everyone else’s time and efforts. Everything begins to center around themselves and their needs, making them appear selfish and greedy. This can hinder their progress if they aren’t aware of their rash thinking and tactics.


What begins as research can develop into an obsession if they let it. Because they act more on impulse than logic, they can get carried away by their sense of right and wrong, which others don’t always agree with.

As long as they go into any situation with the idea that they can fix it, they will always have the best of intentions. If not, they can destroy something before it even begins to grow.

Pluto in Aries astrology predicts that they thrive on meeting the most difficult of demands. They love showing off their ability to overcome anything thrown their way. For them, every day offers the possibility of something better.