The Pluto In Sagittarius: Significance and Meaning

What does it mean when Pluto is in Sagittarius? They are always on the move ready for the next adventure.


The Pluto In Sagittarius: Personality

Sagittarius is always on the go, as they find it difficult to sit still. That’s why Pluto in Sagittarius feels most fulfilled when they’re traveling. For them, meeting new people and having different experiences is what makes them most happy. They are constantly changing and growing through their numerous adventures.

Pluto represents extreme changes, receptivity, power, obsession, discovery and spiritual growth. They are always on a search to add to their wealth of knowledge, for their enjoyment of learning knows no bounds. (Read more about Pluto symbol meanings in astrology.)

As long as they aren’t restricted by anyone or anything, they will travel to the ends of the Earth to gain as much information as possible. And with their open mind, they absorb everything around them and can better understand other people and cultures.

They have an optimistic view of the world. This helps them to process all of the information they take in regularly. And they have so much energy that they never run out of the stamina they need to continue their journey. This is necessary to keep themselves from getting bored with life. 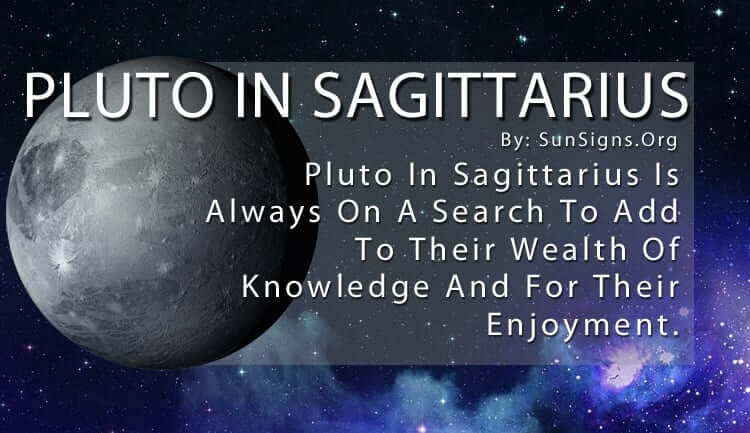 Positive Traits of the Pluto in Sagittarius

It seems like Pluto in Sagittarius is always reinventing themselves, as they are constantly getting a different view of the world. But even after they add something to their education, they still have the same core beliefs that they have always carried around with them.

People of this star sign often have solid morals. They believe their ethics are a large part of their personality. They are so well educated; they tend to think their moral code is the most evolved of anyone’s belief system. And, they will tell you so. They are never malicious in their discussions. They defend their beliefs with conviction. If you do not know your Pluto sign, get it right here.

Negative Traits of the Pluto in Sagittarius

But if the Pluto in Sagittarius people wish to continue their character development, the best thing for them to do is to entertain a different belief system for a while. This is to see what it’s like to walk in someone else’s shoes. That experience alone would offer an invaluable amount of knowledge and foresight that they would eat up immediately.


Pluto in Sagittarius rarely thinks about their next move. This means they can make some pretty rash decisions. However, if they were able to learn from their mistakes and gain perspective from other people’s errors they could go even further in life.

Thankfully, because Pluto in Sagittarius individuals are so good-natured, they often get over things very quickly and move on to their next task with ease. They don’t care about maintaining power or control, as long as they have the freedom to do what they want when they want. And their ability to go with the flow helps them gain the most from each of their experiences.


Unfortunately, they can be a bit scatterbrained at times because they hate dealing with the mundane details of everyday living. They’re too busy to stop and deal with boring errands and responsibilities. But luckily they have such a large social network they often have help in those areas.

This allows them to go off on the next journey whenever the mood strikes and offers them the opportunity to keep growing personally. They thrive on change, for it keeps them from getting too comfortable or complacent. For them, it’s all about the action!