The Pluto In Taurus: Significance and Meaning

What does Pluto in Taurus mean? These people can complete a task from start to finish.


The Pluto In Taurus: Personality

Taurus is a cautious star sign in astrology. This makes them a slow but steady worker. They don’t jump into anything without first considering the consequences. So it takes a while for adjustments to happen in their life. But once they finally commit to something, their mind can never be changed.

Pluto represents transformation, rebirth, rebellion, and obsessions. Pluto also stands for the quest for knowledge and spiritual growth. For Pluto in Taurus, their logical mind doesn’t always allow for changes if they feel they have a solid routine.

Because they are so practical, they tend to prioritize their errands and day-to-day activities in such a way that is the most efficient use of their time. This means the Taurus people hate altering that schedule in any way. 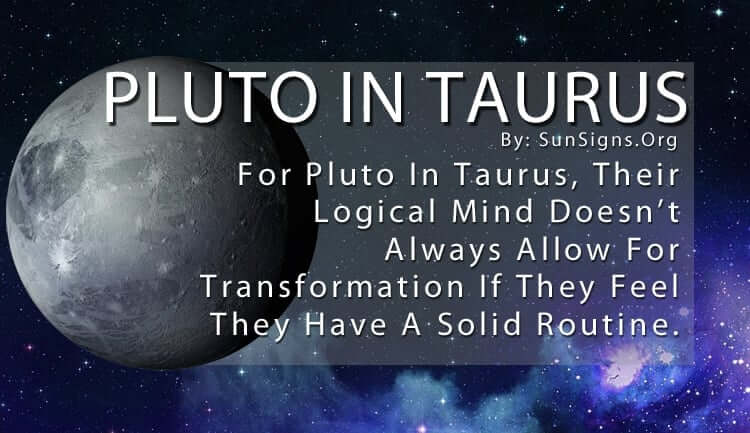 Positive Traits of the Pluto in Taurus

Pluto in Taurus doesn’t mind getting comfortable and staying in one place or doing one thing for a long time. Only when that system stops working or they are forced to change do they make any effort to do so. They are one of the more rational zodiac signs.

As long as they don’t allow their stubborn nature to get in the way of their progress, they will land on their feet every time. And when they’re on that quest for answers that no one can seem to give them, they won’t give up until they find them. They know best what to do, and they will spend plenty of time convincing others of their mental prowess.

Negative Traits of the Pluto in Taurus

The Pluto in Taurus sign people can become quite obsessive when it comes to finding something new that they like just as much as the old. They can lose themselves in their stubborn habits. Once they are involved in researching different tactics and strategies in their lives, they can’t let it go until they have a new set-up.


This means other people may be put on hold while these people are trying to restructure themselves and their schedule. And if other people have a say in these changes, it takes even longer to finish. They are not great at allowing other people to come in.

Also, they hate to delegate authority or take over in any manner. They have their way of doing things, and no one can convince them that any other way is just as effective. This can hinder their progress at times if they take on a bigger project than they realized.

The best thing for them to do is step back from the situation to gain a little perspective on the subject. This is where their network of friends, family, and co-workers can help them out. Nudge this person in the right direction, and they will eventually see the light.

Pluto in Taurus enjoys comfort and beauty a lot. Thus, it can be difficult for them to let go of the cozy environment they have created and do something different. They despise chaos and try as much as possible to avoid messy experiences.

They should learn to embrace these kinds of developments and see them as improvements in their life. Then, they will be able to overcome any obstacle. Some may see this as Pluto in Taurus struggling for control. But, those who know them understand that’s just the way they work.