Moon in the Twelfth House of the Natal Chart

What does the Moon in 12th House mean? These people have good telepathy.

With the Moon in the 12th House, you often fall on one side of the emotional spectrum or the other. There is no middle ground with your emotions. This is why you feel misunderstood much of the time. You find yourself either overly sensitive or numb to what is happening.

One thing is clear – your incredible intuition allows you to help others. And, this is what brings you great emotional satisfaction. You can empathize with others and understand what they are going through as symbolized by the Moon. Your willingness to listen and give them a shoulder to cry on also offers you immense satisfaction. 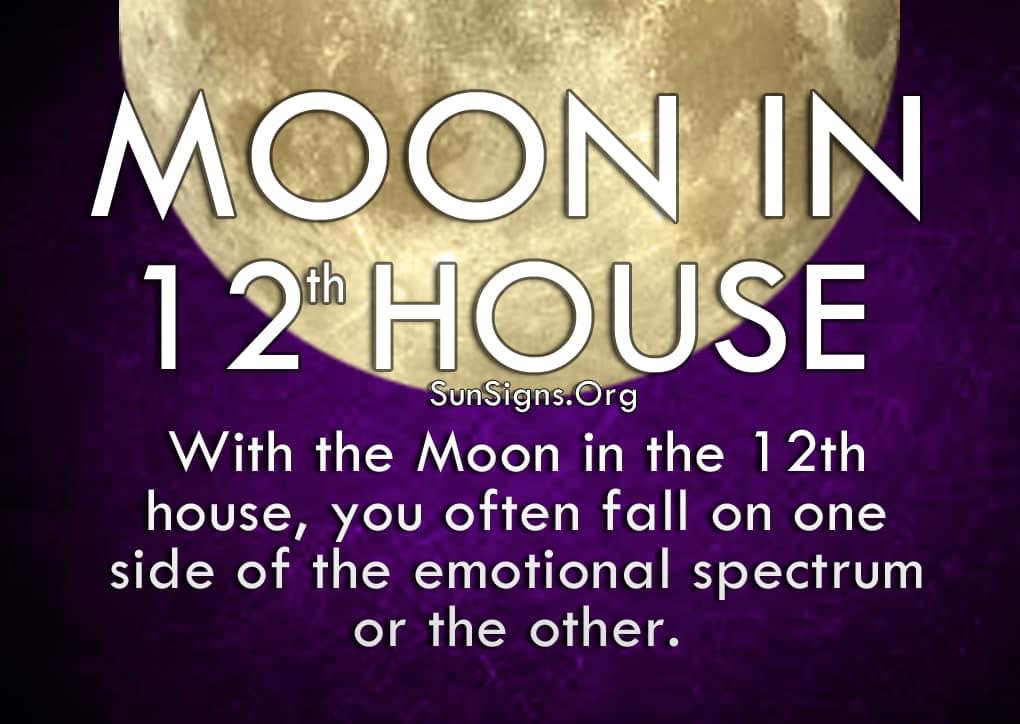 The Moon in twelfth house astrology shows that being able to handle your life and help others with their troubles will allow you to reach a more mature and responsible state of being. This, in turn, will fuel your emotional growth and help you to feel truly enlightened.

Tuning in to other people’s emotions will not prevent you from feeling your own. This is because you will have found a balance between caring for others and caring for yourself. You can develop a better sense of who you are without needing to look to other people to tell you. You will be able to stand on your own with more confidence and not feel emotionally drained.

The Moon in 12th house personality need to feel useful and go about maintaining their emotional well-being. While others may find it a heavy burden to bear, you are more than willing to pick up that cross and carry it. The only thing you have to worry about is going overboard.

Sometimes you get so caught up in other people’s problems you become melodramatic and think yourself a martyr. But that often makes the situation worse, not better, because the situation becomes more about you than the person you’re trying to help. (Your Spiritual Sign and Moon Sign will explain this better.)

When this happens, it’s clear that you, yourself, are going through a difficult time, but you don’t want to deal with it. This is one of the reasons you spend so much time and effort on other people’s problems. Thus, it keeps you from having to handle your own.

This only causes them to grow bigger and bigger until they eventually spill over into your personal life, and then everyone else has to help you solve them. At some point, you have to stop hiding and face reality.

The Moon in Astrology

What is the importance of the Moon in astrology? The Moon is important in the running of daily lives in humans. It plays a major role in how we live our lives and how we interact with each other and our surroundings. The Moon makes us humans by filling our lives with emotions that enable us to react in different circumstances.

Moon in 12th House astrology stands for intuition, emotions, habits, needs, instincts, and behaviors. The Moon brings out your nurturing side. How you were taken care of while a child determines how you will take care of others and yourself.

Moon in the 12th House Meaning

Moon in the Twelfth House represents people who did not have a mother figure while growing up. You might have a mother who was completely absent in your life or one that was physically available but emotionally unavailable.

As a Moon in the 12th House child, you always lacked the guidance and support of your parents when you needed the same most. This placement makes you responsible for yourself and the people around you. You had to cater to yourself at a young age, and so you grew up knowing how to work on and improve yourself.

Moon in the Twelfth House and Emotions

Moon in 12th House father and mother do all they can to be there for their children having that they lacked emotional attachments with their parents and guardians growing up. You need to take care of your emotions and do all you can to be emotionally available for your loved ones.

Moon in the Twelfth House benefits you in that you learn how to be independent without depending on others for handouts.

While taking some time to yourself to recharge is fine, it can’t always be the answer. It only becomes a weak excuse to have others come in and deal with your problems for you. People with the Moon in the 12th House have to learn to take charge of their own life and not allow these issues to pile up.

It may be difficult to face them right then and there. But, it will be much easier than trying to wade through an endless pile later on. Your physical, mental, and emotional health will thank you for it. As the ruling zodiac sign is Pisces, you are bound to get over-emotional.

This will help you create some middle ground and build a solid foundation to develop a stronger, more satisfied you. And that is something that will benefit everyone in the long run.