Number thirteen symbolism signifies that this is the right moment to take the right steps in life and focus on doing what is right. Besides, you should let hard work become the source of your happiness. In other words, you should never question your steps as long as you are taking the right steps. What you should do is give time and wait for the good results of your life. Basically, you need to be in control of your life and respect every decision that you make. Equally, the choices that you make are worth living because they will direct you to the future that you deserve.

Specifically, Number Thirteen meaning implies that you need to allow love to get you to the right group of people. Basically, life is all about the people that you click together. Perhaps, you cannot make everyone happy, but you can make yourself happy regardless of the position you are in. Remember that the people in your life will either push you forward or bring you down. So, you need to be with the right group of people. Perhaps, when you are with the right people, then your life will become easier. Equally, always try to meet someone who can add value to your life.

“Thirteen” is a number historically rich with mixed symbolism. Across America and in other modern-day cultures, it is a number associated, for the most part, with negative superstitions, such as bad luck (think Friday the 13th and its implications). Accordingly, “thirteen” is commonly seen as a testy and unfortunate number that typically results in suffering and/or death.

However, others believe that with death comes a pure and clean rebirthing of the soul: its passage to a higher existence. It has strong Biblical ties and frequently appears throughout the Scriptures. For example, many Christians follow the belief that “thirteen” is the number of the Virgin Mary, whose mission was to crush the head of Satan.

Also, this number 13 can be seen as a symbol of the eternal love felt by Jacob for his twelve sons and Jesus for his twelve apostles. However, the last time that Jesus and his apostles were together was at the Last Supper, after which Christ was betrayed by one of his comrades. In this sense, then, the number refers back to an omen of misfortune once more.

The symbolic meanings of the number 13 extend far beyond Christianity and Judaism, though. Long ago, in Norse mythology, a banquet was held for Baldur, the strong god of nobility and redemption, in Valhalla. Twelve other Norse gods were present for the celebration. Later, Loki (the sinister trickster) arrived at the banquet uninvited. Hoor then killed Baldur with a magic spear given to him by Loki. Obviously, “thirteen” is once again symbolic of darkness, death, and betrayal.

With both the Valhalla banquet and the Last Supper, many view Judas the betrayer and Loki the villain as a symbolism of the number “thirteen,” thus assigning negativity to the symbolism. However, one can look at these scenarios from the opposite perspective, considering Christ and Baldur as the thirteenth guest. Within this view, positive thoughts and concepts can arise, such as ascension, awakening, and rebirth – far cries from the death and destruction listed above. 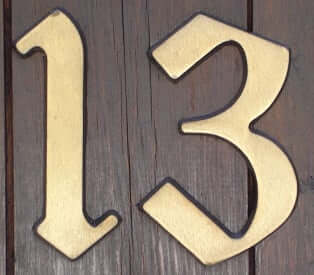 Even further back, the ancient Greeks and Egyptians had their own interpretations of the symbolism of “thirteen.” In Greek mythology, the god Zeus was deemed the thirteenth and thus the most powerful of the deities. In this regard, he gave the number “thirteen,” such symbolic associations as the concepts of fullness, realization, accomplishment, and fulfillment. These ideas are far from negative but were considered to be equally intimidating to the average Greek citizen. Traits such as these put the fear of the gods in them and facilitated their avid worship.

The Egyptians had a more detailed account to explain their god’s connection to this number. Osiris, the powerful solar god of life and death, was murdered by Typhon, his treacherous brother. Trying to restore her husband (who was also her brother) back to life, Isis collected his body. However, Typhon stole it, cutting it into fourteen pieces and scattering them around the Earth.

Although Isis searched long and hard, she was only able to reclaim 13 of the body parts. As a whole (no pun intended), this story implied that “thirteen” was the precursor to total completion. Furthermore, this number 13 symbol held more significance in ancient Egyptian life, as there were believed to be thirteen steps on the ladder to eternity, the last of which is believed to signify the spiritual completion of the soul.

The number “thirteen” also holds more general symbolism that is not necessarily tied to a particular group or culture. In the natural realm, we can see that there are thirteen moons in each calendar year. Drawing on the symbolism associated with the moon, we can deduce that the number shares in such qualities as femininity, magic, emotions, and the internal psyche.

We can also examine “thirteen” symbolism through basic numerology readings. For example, we can start by identifying one of the two components of the number: the number three. This is a powerful number, representing numerous trifectas and, of course, luck. With themes of creation, balance, and mystery, it’s no wonder that we see this number so frequently.

The other digit in the “thirteen” symbol has complementary notions, making it a powerful symbol. One speaks of birth and new beginnings, solidarity, and unity. Combined together, the “one” and “three” detail the path through a great story, manifesting the best qualities of each set of ideals.

Number thirteen spiritually means that this is your chance to stand for your dreams and focus on your spiritual life. In other words, you need to stand with faith and do what is right always. Perhaps, you should not get stuck in your last circumstances but get up and change your life. Besides, you are great because of your spiritual connection. In other words, you believe that taking a spiritual path will give you a great life. Probably, you will have that life because you believe in God.

Basically, number thirteen shows how great you are because you believe in yourself. Success will never stop unless you decide to stop looking for it. Actually, you have to feel the pain in order to become successful in life. More so, you have the power to push through every path in your life. Equally, it is your chance to act and start taking making your own rules.

The symbolic meaning of number 13 illustrates that this is your chance to control your life because you have the potential to do so. Besides, the progress you are making in life is because you understand how to conduct yourself. Perhaps, you can let your expectation take you towards your success. This is the best opportunity you will ever have in life. Remember that great people worked relentlessly to become the people they are now. Equally, make changes that will bring a great impact on your life.