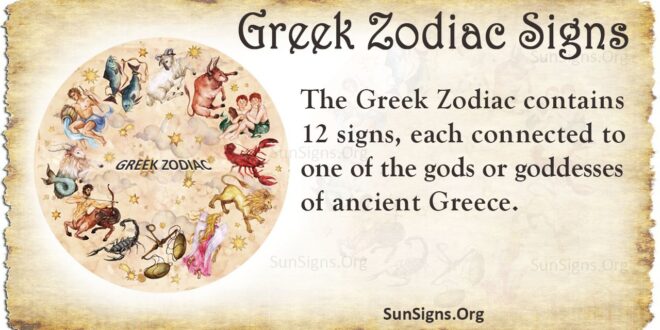 The Greek Zodiac, like most Western versions, contains 12 signs, each connected to one of the gods or goddesses of ancient Greece. Each of us seeks answers as to why we do things the way we do, and this astrology reading can give you good information in regard to this concern. Knowledge of your personality allows you to work around any flaws and emphasize your actions.

To know which Greek Zodiac Sign is correct for you, you must first find out your Greek astrology interpretation. A reading in Greek astrology considers the planetary positions and their cumulative and relative influences on individuals. It is said that the God or Goddess who rules your sign will decide your nature. Therefore, the Greek God that represents your Greek zodiac sign represents you.

Using the date of birth of October 1, 1955, as an example, the Greek planet deity for this individual is Venus, the goddess Aphrodite and the sign Themis. The sign carries the meaning of the law of nature.

Themis is said to be a counselor, and representative of the law, good order, and custom. Themis is the one who will organize large groups of people and will guide the world to conform completely to societal mores. He is supposed to connect to the holy voice.

The colors attached to this person would be pink, blue, and lavender. Her gemstones are opal, tourmaline, and agate. The image usually portraying the sign is a woman carrying a scale. One of her children is Prometheus. You can see quite a bit of information is provided about the Greek Astrology sign in the reading.

Aries: Ares (The God of War)

Ares, also known as Mars in the Roman language, was the god of war. He was born of Zeus and Hera. He was strong, energetic, young, and a proud warrior. Ares was always ready for war, and Aries natives bear many characteristics similar to those of this Greek God.

Arians make good leaders, and they are motivated by courage, ambition, and power. Nothing can hold them back when they resolve to do something.

Taurus: Hestia Greek Zodiac (The Goddess of the Hearth and Home)

Hestia took good care of her family. She was a homemaker, and many adored her ability to keep the family unit together. Taurus natives value their family more than anything. They will sacrifice a lot just to make their families happy.

Taurus natives are caring, loving, responsible, and kind. They love spending time with their loved ones and making meals for them.

Gemini: Hermes (The God of Trade, Luck and Language) and Athena (The Goddess of Wisdom and Military Victory)

In Roman mythology, Hermes was known as Mercury. He was intelligent, active, wise, confident, and reliable. In Greek mythology. Hermes was a messenger.

Athena was a Goddess that many people relied upon. She was wise and accurate. Intelligence was one of her wonderful traits. Gemini natives are always confident about their decisions in life and use their intelligence to always be on the right path.

The moon rules Cancer. Artemis held the magical powers of immortality and healing. She was nurturing, and so are Cancer natives. Taking care of their surroundings and loved ones is always their number one priority.

You are always protective of the ones that you care for. Artemis was known as the protector of young girls. She also possessed great hunting skills having that she lived in the woods.

Leo: Zeus (King of the Gods)

In Roman mythology, Zeus is known as Jupiter. Zeus rebelled against his parents. He was a powerful individual. Just like Zeus, Leos are persistent, powerful, rebellious, and motivated by success and power.

Virgo: Demeter (The Goddess of the Earth, Grain, and Agriculture)

Demeter was maternal, loving, caring, kind, and protective. Her ability to nurture everything makes her the perfect fit for her role. Virgo natives also care for everything they hold dear to their hearts. They do all they can to ensure that they are of service to others.

You are guided through life by your ability to nurture and care. The sensitivity and kindness you exhibit draw people closer to you.

Libra: Aphrodite (The Goddess of Love)

Aphrodite was the daughter of Uranus. Her beauty and charm caused war between Greek Gods that wanted her to themselves. Men were also captivated by her charm and beauty. Libra natives are just like the Goddess of Love. They are charming, passionate, and charismatic. They also possess great communication skills.

Scorpio: Hades (The God of the Underworld)

Hades, also known as Plouton and Pluto in Roman mythology, was mysterious and dark in his ways. No one could figure out what he was up to at any given time. Just like Hades, Scorpio natives are secretive, mysterious, and passionate.

Sagittarius: Dionysus (The God of Wine and Festivity)

Dionysus was the God of pleasure, wine, festivity, and ritual madness. He was enthusiastic and philosophical, traits that many Sagittarius natives possess. His wisdom was great, and he was held in high regard for the decisions he made. Sagittarius natives are fun to be around, and they never hold themselves back from living their best life.

Capricorn: Apollo (The God of the Sun and Master of Supernatural Healing)

People born under the Capricorn zodiac sign are aligned with Apollo, and they come out as having a desire for security and safety. Capricorn natives, just like Apollo, are practical, wise, intelligent, and ambitious. They do not take anything for granted because they always want the best for themselves and their loved ones.

Aquarius: Prometheus (The God of Creation and Forethought) and Ganymede (The Cup Bearer of the Gods)

Prometheus was immortal. Being born an Aquarian aligned with Prometheus makes you reliable and cooperative. Working as a team enables you to bring out the best in yourself and others. Partnerships with people guarantee you success only if you make the right decisions and choices.

Aquarius constellation is also associated with Ganymede, The Cup Bearer of the Gods. He was the most beautiful man on earth.

Pisces: Poseidon (The God of the Sea, Horse, and Earthquakes)

Poseidon ruled the sea and everything in it, including fish and sea monsters. He could move the sea the way he saw fit, and many people thought that he had the ability to move the earth. Just like Poseidon, Pisces natives are powerful and determined always to have things go their way.

This allows a wide range necessary to look at real-life people in terms of character and temperament. Hestia, the goddess of the earth, is gentle, caring and giving, and forms the nucleus of the family.

Hera is given to jealousy, which is quite appropriate given Zeus’ roaming eye. Once you become aware of your Greek Zodiac Sign, you will be able to determine how the Greek God’s traits for that sign match your character.