The moon in Scorpio people is passionate and energetic. They are leaders by their rights. Besides, leaders are born within this season because from a young age they have to go through certain challenges. They become stronger since they are young so that they can preserve other things that come their way. Perhaps, you have to be hungry to grow and to manifest what is in your head. Equally, you are king because you are hungry for what you are going after.

What happens when the Moon is in Scorpio? Specifically, most people fail because they cannot concentrate on their vision. Actually, if you are going to become a successful person, then resilience and hard work should become the great aspects that will push you. Besides, when you have a vision, you will be in a position to see an opportunity inside an obstacle. Notably, when you don’t win, you will learn.

While Scorpios appear calm on the outside, on the inside, they are a raging sea of emotion and intensity. This is what makes them appear so mysterious. The Moon in Scorpio’s appearance magnifies their allure. They are incredibly intuitive and can read people like a book, while they remain obscure.

Because of this psychic ability to see right through people’s facades, this zodiac sign can come off as quite intimidating. Some are attracted to their powerful personality, recognizing there’s so much more to this person that they will never know. Others are suspicious of their need for the extreme, especially Lunar Scorpios. 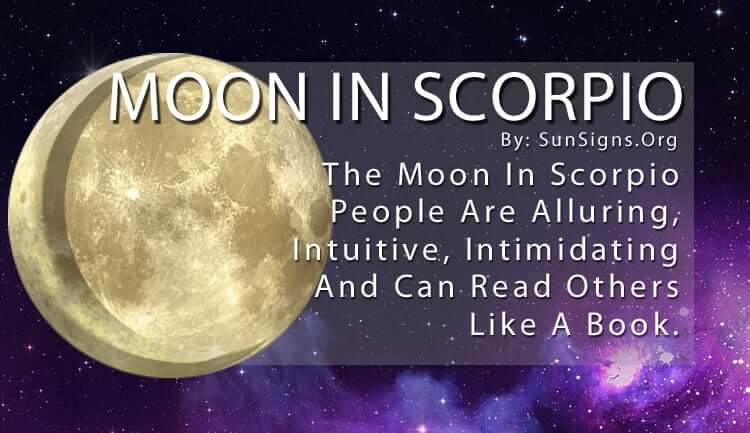 Positive Traits of the Moon in Scorpio

The Moon in Scorpio astrology’s desire for meaning mixed with their intuition makes them highly intelligent people who can confidently navigate their way through the world. Besides, everyone is created in such a way that they can see what is ahead of them spiritually. When you focus on your s[irituality, then you will hear the voice of your destiny. Equally, you will evolve to become a great person because you are looking for calmness and to move up.

Generally, the Moon in Scorpio’s husband will always have high expectations of living a great life. Sometimes what you expect will push you to certain limits that you cannot imagine. On the other hand, Moon in Scorpio’s spouse should always learn how to react to every change. What they need to change is what will happen.

Because of this immense strength, they often attract a social circle that long to be as self-assured as they are. Lunar Scorpios are the most adept at reading a situation and responding correctly, whether it’s a simple social gathering or a crisis.

As for their desires, it doesn’t matter what they’re going after; it’s all or nothing every time. There’s no middle ground with them. They have an incredible need to find heightened and profound experiences that add significance to their lives.

Negative Traits of the Moon in Scorpio

The Moon represents our emotions, feelings, and imagination, and the Scorpio zodiac sign has all these in spades. As a water sign, their mood goes through ebbs and flows. But, they would never show their true feelings to the rest of the world. They keep the depths of their personality hidden as far away from others as possible, revealing only what they want people to see.

Nothing surprises or frightens them, making them both sympathetic and detached at the same time. This is difficult for some people to comprehend. This is because the Scorpio moon can understand a person’s problem. And they have a solution for it without getting emotionally invested in the situation.

Is the Moon in Scorpio Good or Bad?

Sometimes that can come off as cold or aloof. The Moon in Scorpio is simply going through the motions of figuring out what the issue is while simultaneously solving it. They can swim through turbulent waters and come out stronger on the other side. Also, that’s exactly what the Moon in Scorpio people do.

While this may seem cruel to some, those who pass the love tests will have a devoted mate for life. The Moon in Scorpio intensifies their immense love for those close to them and brings it up to almost obsessive levels. Those who have just met this person might be scared off by their severity. But those who stick around and get to know them well will grow to appreciate this devotion.

Benefits of Moon in Scorpio

You never forget the Scorpio Moon in your life. They bring you through some serious and enlightening experiences that enrich your very existence. And if you can handle their desire for ultimate satisfaction in everything they do, you can grab onto some of that gratification for yourself. Notably, procrastination will not make you pursue your destiny because you will never get to that day you are aiming. Be on the way out to your dream life.

Ultimately, you have nothing to lose because you have to keep creating the life you want to live in. Besides, everyone has the potential to make things happen because of the hunger they have for the future. Also, the moon in Scorpio wealth wants you to focus on the things that can bring fear to your life and sort them out. Equally, there is a light in everyone because they can see who they can become in the future.

The Moon In Scorpio, people need a partner who is as strong as they are to handle the intensity of their mate. Because they are so in-tune with the rest of the world, Scorpios are always on the lookout for problems and people who might betray them. This means Lunar Scorpios especially can put their partner through a series of tests. And, this happens without them even knowing their performance is being judged.