Mayan symbolism is some of the most studied of all the ancient cultures. Their culture was filled with both wonder and intellect, making their symbols diverse in nature and meaning. As one of the few ancient civilizations with its own logistical writing system, the Mayan symbols, called hieroglyphs, were difficult to interpret for many years.

However, since 1973, we have had a pretty good grasp on their meanings and can even decipher words. Mayan symbolism, though, goes far beyond an “alphabet“. They used a variety of pictures to convey their beliefs and ideas, as well. Additionally, they developed their own comprehensive calendar and complex Maya Zodiac system (not to be confused with that of the Aztecs to the north). 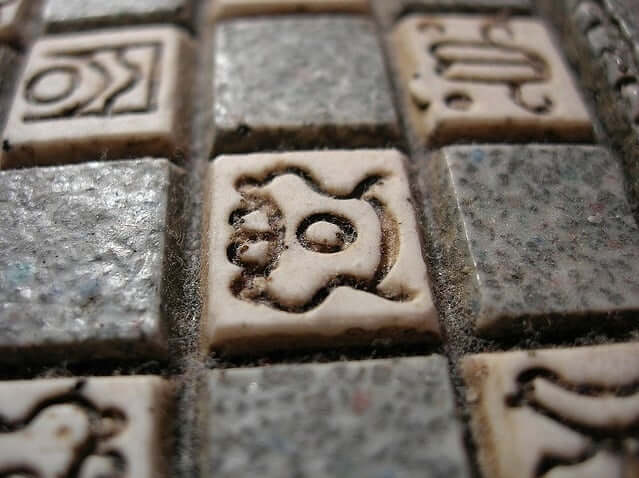 Symbols representing the Earth and its cycles and elements were very common across all ancient cultures.


The Maya in particular had strong ideas about the natural forces that governed our world. Perhaps one of the strongest is the symbol for Earth.


As a representative of movement and slow shifting, the symbol for Earth served to remind the Mayan people of the natural and spiritual forces at work in their lives. They believed that if they focused upon this symbol enough, they would be given the gift of patience to work through difficult transitions in their lives.

The Mayans also believed in the paralleled significance of day and night, light and dark. For them, the sun was a symbol of ascension and clarity in the mind and was thus very highly regarded. By calling upon this symbol, they believed that their awareness would be increased and that enlightenment would be facilitated.

The sun was seen as bringing both physical and mental productivity to people. In a sense, it was viewed as a teacher or mentor, guiding people with its illuminating qualities. More literally, the sun is the ultimate facilitator of the growth of crops and warmth from the cold.

With light comes dark and with day comes night. Like us, Mayan tradition viewed the night as a time to put things to rest. It was also thought to be representative of balancing any issues you may have. There is a time and a place for everything, and, often times, we should sit on our problems before taking a course of action.

While we sleep, our subconscious can go to work without the physical distractions of the day. The Mayans were certainly on to something long before us.

In addition to the Earth’s cycles, the Mayans also took great interest in its inhabitants. They placed a large degree of symbolism on animal totems after carefully observing them in the wild. The eagle is one of the most iconic symbols in Mayan lore, as it is thought to represent contemplative and meaningful thought.

This symbol assisted people with focusing and channeling the inner wisdom that nature gives us access to. We need only clear our heads and focus to absorb and understand it. Mayans also thought of the bold eagle as a symbol of protecting one’s community and exercising cooperation amongst the group.

Rulers of darkness and the night, bats were seen as the guardians of the underworld. The Mayans did have a concept of good versus evil, although it was seen in a different way than other cultures. Mayans actually revered these beasts for being dual, having both good and evil, dark and light qualities.

Jaguars, which were native to the area occupied by Mayans, were another highly revered animal. Elegant, silent, confident, and deadly, the jaguar symbolized strength control, and even divinity. All of these attributes were important signs of power in the eyes of the Mayans.

The jaguar also represented a duality similar to that of the bat. By night, these big cats ruled the underworld, but by day they perused the brightly lit sky. This creature was clearly seen as a natural leader who controlled all cosmic forces that acted during both the day and the night.

More than 3,000 years later, we are still trying to piece together the information that we now know about this ancient culture. Although we now understand the meanings of many of the Maya symbols.

There is still much about their systems and culture in general that remains unknown. That is all part of the mystery and allure of this fascinating group of people.