How compatible are Libra women and Leo men mentally, emotionally and sexually? Combining air and fire can either nurture a spark or blow out the flames, which is how it is between the Libra woman and Leo man. The female scale considers all sides of an issue while the male lion barrels ahead with confidence. Communication and patience are very important for this relationship.

These two sun signs will probably meet at a party, for both the Libra woman and the Leo man are social creatures. She is fun and charming and he is bold and dynamic, and she notices him first. He is often the center of attention and she is making the rounds.

But the Leo male will be the one to make the first move, as he is a more dominant personality. He enjoys her various opinions on many topics, for she studies both sides of a situation before making a decision. And the Libra female likes keeping up with his sharp wit and sense of humor.

The Libra woman Leo man conversations continue well into the night as they get to know each other, and she discovers his creativity and fearless nature. He, in turn, sees her love of balance and justice which he admires. With this kind of mental connection, this Libra woman Leo man pair can easily find themselves in the bedroom.

This is where the romantic Libra women and the passionate Leo men can either come together or fall apart. She likes slow affectionate sexual gestures paired with fun mind games. He may find this light and playful at first, but eventually he wants to turn up the heat.

As long as the Leo man doesn’t get in the way of her decision-making process, things will go smoothly. And she has to allow him the freedom to roam the plains, for he is always looking for someone to bring with him. The Libra woman will revel in their new experiences, and he appreciates her optimistic outlook on life. 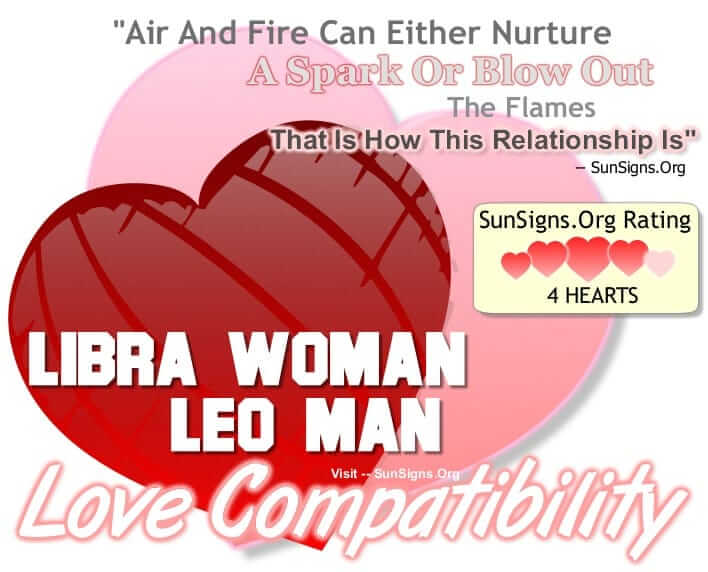 While the Libra experiences their lovemaking on a mental plain, he is much more physical and passionate. He automatically takes the reins and unleashes his prowess upon his Libra lover, and this can be a bit overwhelming for her. The Leo male will have to tone it down if he wants her to enjoy their sexual union as much as he does.

But in the interest of maintaining harmony between the sheets, the Libra female will try to keep up with him to find an approach that works for both of them. If she can sufficiently stroke his ego, making him feel like the king he already thinks he is, this should be no problem.

But this may grow tiresome once they are back in the real world, for his arrogance may keep him from noticing anything out of sync between the Libra woman and Leo man. She will have to focus on the strengths he brings to the relationship. He is ambitious and driven, so he is often successful and financially stable. The love compatibility between the two star signs can be made better with better understanding.

And both of the zodiac signs enjoy lavish gifts so there will be no problems with the way they spend their money. But he can be very brash at times and may grow impatient with her tentative nature, and she will hear his roar. Thankfully, the Libra woman is so good with communication and compromise that she may be able to calm him down so they can find a mutually agreeable solution.