The Sun In Pisces: Significance and Meaning

The sun in Pisces people always fit in every situation. They are very flexible with everything that happens in their lives.


The Sun In Pisces: Personality

The Pisces Sun person is quite the dreamer. When the Sun is in Pisces, they are up in the clouds with it. Off in their world, they imagine a beautiful place. It can be difficult to bring them back to reality, but it’s nice to visit their fantasy too.

The Sun represents individuality in astrology, but Pisces zodiac sign does not have their strong personality. Because they are so fluid (they are represented by the fish after all) they’re able to go with the flow and transform into whatever fits the situation best. They are incredibly intuitive and know what’s necessary to deal with any turn in the tides. 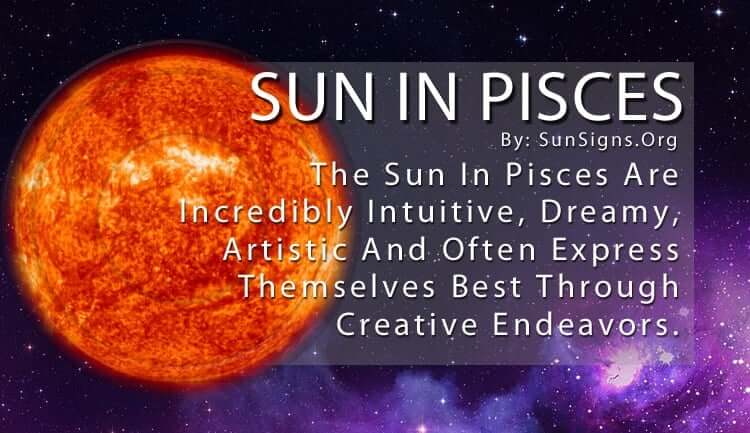 Positive Traits of the Sun in Pisces

The Sun in Pisces are always thinking of ways to turn any event into a magical moment. It has to be one that has meaning and purpose but defies all logic and reason.

They rely on their emotions for perception, and the Sun in Pisces intensifies their mood. Because of this, they are quite artistic and often express themselves best through creative endeavors. And their sensitivity toward others makes them a wonderful friend and romantic partner.

Because they prefer to escape reality rather than face it, it’s important for Pisces Sun people to have a dream or goal that’s attainable. This helps them to focus and stay on task. And when the Sun is in Pisces, it’s even more imperative they find something they enjoy to keep them engaged in their career and their personal life. If they don’t, they tend to drift aimlessly. They get stuck in a fantasy land that keeps them from being healthy and productive.

Negative Traits of the Sun in Pisces

Their kind nature can also make them vulnerable though, and the sun in Pisces sign must be careful not to be gullible where others try to take advantage of them. Because they are so caring and trusting, others tend to walk all over them if they aren’t more assertive. And they will do anything to avoid conflict, which is not a good combination.


When the Sun is in Pisces, they would rather swim deep under the water than face an argument with a loved one. Luckily, they are in tune with those around them. So, they can usually avoid such an obstacle by taking care of it before it becomes a problem.

They have to take caution in their approach, for it may hurt them in the long run. They don’t often see the bigger picture before it’s too late. And, they will sacrifice themselves before putting anyone else in harm’s way. They have to be reminded that it’s okay to take care of themselves too.

The Sun in Pisces people might not have a sense of purpose. They can become depressed if they feel no one else understands them. They need to feel wanted and loved because they care about others so deeply. Any criticism cuts just as deep, and they need constant reassurance that they are doing something right.

This is because they tend to be irresponsible and forgetful, even though they try so hard to please everyone. It’s just so difficult to take care of the mundane details of reality when their imagination is much more lovely and enjoyable.

And with the Sun in Pisces, they need that fantasy to keep themselves going. Without the joy and exuberance they get from this rich world, they would feel lost and confused. Allow them this escape, though, and they will bring you to places you’ve never dreamed.