The seven chakras are representative of the central energies that govern our health and well-being. It should come as no surprise, then, that seven powerfully symbolic animals from nature are often depicted with the 7 chakras.

Each of the 7 chakras corresponds to a particular animal that seamlessly models the qualities and traits of that energy center. Sometimes, animals speak to us in a language that cannot be conveyed using words. This makes spiritual experiences easier to comprehend and apply to our personal lives.

Animals are generous in their offerings of guidance and wisdom. The animal that is associated with each chakra was carefully chosen due to not only its symbolic qualities but also its physical behaviors.

Once you recognize each chakra, its meanings, and its animal symbol, physical symptoms and sensations that you feel might just make more sense. 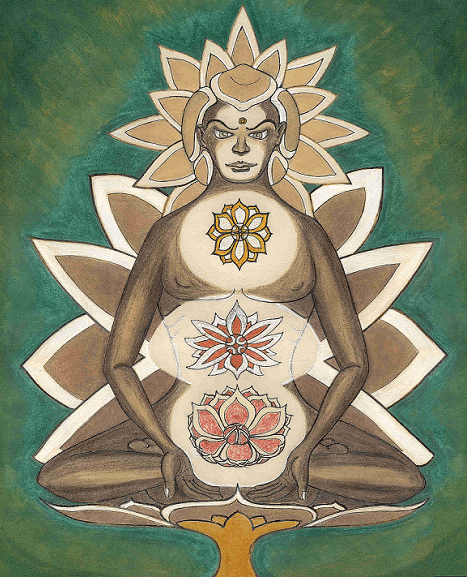 Beginning from the bottom (near our sit bones/base of the spine), we first encounter the Muladhara or root chakra. Depicted as an elephant, Muladhara mimics this great animal’s traits. That includes offering of protection and engaging in love and closeness.

The elephant’s mammoth size also comes into play with this representation, indicative of stern and powerful protection and holding one’s memories close – the elephant does have a highly efficient memory.

Additionally, the large elephant is capable of charging through blockages – something that is crucial, as this chakra deals with the body’s excretory and adrenal systems. The direct message of the elephant in a general sense is, “I provide”.

Moving slightly forward in the body, the next chakra focuses on the energies of the genitals. Svadhistana, or sacral chakra, is represented with the ferocious crocodile. With a message of, “I develop”, the crocodile symbolism speaks to us with encouragement.

This chakra works to balance us. In nature, the crocodile dips into the water before resurfacing, which is symbolic of our ability to change, adapt, and grow. In addition to being the reproductive and sexually charged center of energy, Svadhistana also aims to inspire creativity.

The solar plexus, Manipura, sits just upward, at the navel. The ram is indicative of the energies that are focused here: motivation, determination and will power.

This chakra governs the abdominal organs and the pancreas and contributes to our sense of identity. Fittingly, the ram sends a message saying, “I recharge”. 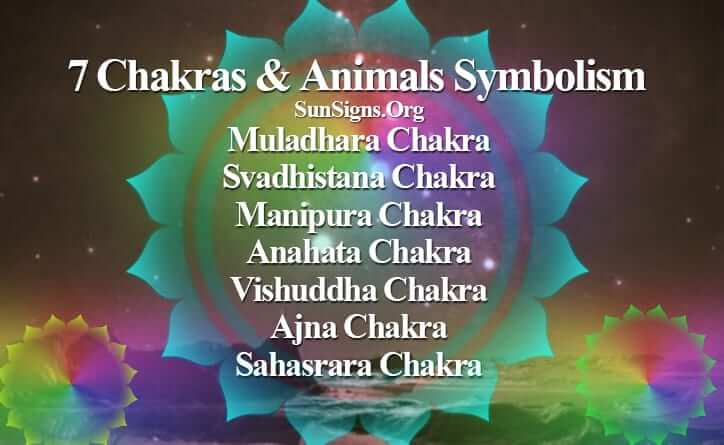 In our hearts, Anahata governs our lungs and thymus in chakra meditation. Depicted as an antelope, this chakra speaks to our tender and emotional side.

It is our seat of compassion, love and understanding. Thus, the antelope leaps over petty quarrels and disagreements with grace, always acting with kindness. Its message is, “I share”.

Vishuddha, or the throat chakra, controls the crucial thyroid gland. Additionally, it charges our emotions and provides us with the ability to express ourselves creatively and effectively. After all, communication is key for getting on with others.

The animal symbol that is connected with Vishuddha is the great white elephant. As a master of communication, the white elephant symbol harmonizes and makes interactions with others more pleasant and smooth. It is an animal that stands for purification. Appropriately, its accepted message is, “I express”.

As an addition to the tender antelope, the black antelope meaning is indicative of an inner journey. Representative of the third eye, or Ajna, this animal speaks of gentle and honest qualities, such as truth and trust.

Typical of an eye, the Ajna is also connected to vision – not just physical vision, though. This type of vision is of a higher sense and is more about intuition and introspection. While making this internal journey of exploration, the black antelope chakra healing says, “I guide”.

Lastly, the final chakra sits atop the head. Fittingly called the crown, or Sahasrara, this chakra governs the brain and one’s thinking. Its influence goes beyond the basic senses and assists in enlightenment.

The ancient Hindu texts do not associate an animal with this all-knowing chakra. Rather, they simply refer to divine qualities, such as ascension and limitless potential. As a chakra, Sahasrara’s most basic theme is, “I reveal”.

As with all things, though, symbolism and spiritual enlightenment is subjective and highly personal. If something speaks to you and emits a specific energy, listen to it. There are no clear cut right or wrong answers.