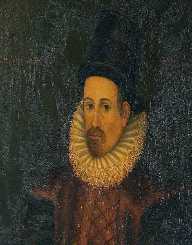 Physician, physicist, and philosopher William Gilbert was born on the 24 May 1544 in Colchester, Essex, England.

William Gilbert was educated at St John’s College at the University of Cambridge obtaining a B.A. in 1561. He went on to study for an M.A. (1569) and was awarded a doctorate in 1569 and became a senior fellow of St John’s College.

His theories on magnetism were published in his book, De Magnete in 1600. This book, written in Latin, dealt with what was known about magnetic phenomena as well as his extensive research. William Gilbert had conducted many experiments as he sought to understand magnetism and the compass. He worked with compass makers, ship’s captains and other in his experiments using a free moving needle and a spherical magnetic lodestone. He discovered that one could create from metals by rubbing with a magnet. During his experiments, he made the connection between magnetic forces and the rotation of the earth. His theory that the earth had its magnetism provided the basis of geomagnetism. William Gilbert also put forward the idea that the Earth was not the center of the universe and theorized that it was a magnetic planet with north and south poles.

William Gilbert was the first to show the difference between magnetic and static electricity. He was also the first person to explain how a magnetic compass works and he coined the term electricity.

At the time of its publication, De Magenta was seen as a milestone in physics and was read by Galileo.

William Gilbert continued with his experiments as he attempted to prove the magnetism of the planet becoming the first to use the experimental scientific method.

William Gilbert never married or had children and died on the 30 November 1603.