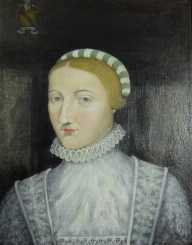 Anne Hathaway was an English lady who became the wife of the famed English playwright, William Shakespeare.

Anne Hathaway was born in Shottery, Swindon England in 1556. She was the daughter of a wealthy farmer named Richard Hathaway. She grew up on their farm in Stratford-upon-Avon. She inherited the sum of GBP 6 from her father when he died in September 1581. She was 25 years at the time. Agnes Hathaway became the custodian of the inheritance until Hathaway got married.

Hathaway got pregnant out of wedlock. In November 1582, she got married to William Shakespeare when she was three months pregnant. At the time of the wedding ceremony Hathaway was 26, eight years older than Shakespeare who was 18 years. Theories emerged that the influential Hathaway family forced Shakespeare into the marriage. Some contrary theories confirm the love of Shakespeare towards Hathaway and the resultant marriage.

The couple had three children together. Their first daughter Susanna was born in 1583, six months after their wedding ceremony. Five years later in 1585, Hathaway gave birth to twins. The two babies were named Hamnet and Judith. Judith survived to adulthood, while the boy Hamnet died in August 1596. He was a victim of the rampant bubonic fever in Warwickshire. Hamnet became the inspiration of the popular play Hamlet. Shakespeare wrote the play four years after the death to idolize his departed son.

In depicting his love for his wife, Shakespeare wrote several poems of romantic expression to his wife. The poems are preserved at the British National Archives in London. During the execution of his will, Hathaway got the traditional items according to the Elizabethan customs. She got most of the furniture and household items. Susanna became their overseer of the Shakespeare family estate. Due to the strained relationship with her father, Judith was almost overlooked. She received very little from her father.

The controversy came up again during the burial of William Shakespeare. Hathaway expressed her wish to be buried in the same grave with her husband. Shakespeare gave his last wish to the contrary. He instructed a curse to be engraved on his tombstone. He implored divinity to curse anyone who opened up the grave and moved his bones. The public read this as a confirmation of the failed marriage theory.

Anne Hathaway Shakespeare died on August 6, 1623, at the age of 67. Due to the curse engraved on Shakespeare’s tombstone, Hathaway was buried in a new grave next to her husband. On her tombstone, inscriptions of Susanna’s will for her mother were engraved. She prayed that her mother is resurrected one day to meet Christ in the heavens.

Hathaway led a quiet life in their rural farmhouse until Shakespeare became a famous character in London. She then became a figure of concern for the public. She became subject of many plays and novels in England. In 1845, her life was depicted in the novel Anne Hathaway published by Emma Severn. In another publication titled Shakespeare in Love, Hathaway is serialized as a happy woman in a stable marriage to her famous husband.

Controversial depictions appeared from dissenting quarters in England. Hathaway was portrayed as an adulterous and immoral woman. In his several books on Shakespeare, Frank Harris gave a negative picture of Hathaway. She was a conniving seductress who forced Shakespeare into marriage by her pregnancy. Others portrayed her little inheritance as proof of punishment for her immorality in marriage. The controversy still rages on in literary circles. Historians and literature students will make their input depending on how they approach the subject.

In recent years, several films from both sides of the debate have been produced. In 2002 the film titled Shakespeare in Love was released. Three years later another film A Waste of Shame was produced. The two portrayed a failed marriage between Hathaway and her husband.

In 2010 the novel titled The Secret Confessions of Anne Hathaway was published. The author Arliss Ryan argued that most of the famous plays by Shakespeare were actually written by Hathaway. The novel added voice to the claim of Hathaway being the force to Shakespeare’s fame.

The Hathaway farmhouse in Stratford-upon-Avon became a museum for the public. She lived a quiet life in the rural countryside raising her family. She became famous as the wife of England’s most prolific playwright. With fame came controversy. In either way one approaches the subject; Anne Hathaway still remains an enigma in British literary circles.