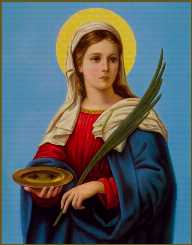 Lucia of Syracuse was born c. 283 in Syracuse, in the Roman Empire. Her other names are Saint Lucy and Saint Lucia.

Her father died when she was five years old. As a wealthy man, Lucia's father left great riches to Lucia and her mother.

Lucia decided she would enter service to God and wanted to give her wealth away to those in need.

Lucia's mother decided to find a suitor for Lucia. She felt her daughter needed a husband as there was no man in the house.

The suitor discovered that Lucia was distributing her wealth. Due to this, he disowned her to the Governor of Syracuse. The Governor ordered Lucia to burn a sacrifice. He decreed the order as it was during the Decian persecution period.

When Lucia refused, the Governor sent her to a brothel as punishment. He wanted to ruin her reputation. The government executed her soon after.

The church ordained Lucia as a saint during the sixth century. She is a saint in several churches, including, the Roman Catholic Church, Lutheran Church, and Anglican Communion Church.

She has approximately 60 churches named after her worldwide, nearly 20 towns or cities, and 11 schools.

Lucia's name means "light." Her festival, known as the festival of light, is celebrated on 13th December each year.