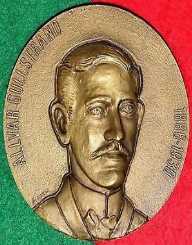 Allvar Gullstrand was born on June 5, 1862, in Landskrona, Sweden. His parents were Sofia (Korsell) and Dr. Pehr Gullstrand.

Allvar Gullstrand finished his primary and secondary educations in 1880. After this, he went on to attend Uppsala University. He stayed here until 1885 before transferring to a school in Stockholm. Here, Allvar Gullstrand focused on studying medicine. His specific field of study was ophthalmology which is the study of the eye (and the disorders and diseases that can affect it). He earned his master’s degree in 1888.

In 1911, Allvar Gullstrand  invented a medical device called the “reflex-free ophthalmoscope.” This device made it easier for all sorts of eye-doctors to see into their patient's eyes. The device was so useful that it is still used today (although it may have been changed slightly over the years).

In 1927, Allvar Gullstrand retired but was given the title of emeritus professor at Uppsala University. After his retirement, he continued to work on his research.

All of Gullstrand’s awards and accomplishments are due to his achievements in the medical field. Some of his most prestigious awards are listed below.

Nobel Prize in Physiology or Medicine (1911)

During his lifetime, Allvar Gullstrand was a member of many prestigious groups, including those in the following list: German Ophthalmological Society, Board of Directors Society, Royal Society at Uppsala (President during 1913-1914), Royal Swedish Academy of Sciences, and the Nobel Physics Committee.

Allvar Gullstrand married Signe Breitholtz in 1885. Together, the couple had one child: Esther. Sadly, the child did not survive to adulthood.

Allvar Gullstrand died on July 28, 1930, in Stockholm, Sweden. The cause of his death was a cerebral hemorrhage. He was 68 years old when he passed away.

The Gullstrand Medal, given out by the Swedish Medical Society, was named after him. This award has been given out since 1922.