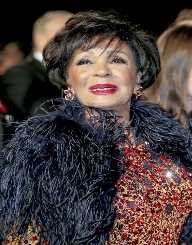 Shirley Bassey is a Welsh singer who is best known for singing the theme songs to three James Bond films.

Shirley Bassey was born in Tiger Bay, Cardiff, Wales in 1937. Bassey was the youngest of seven children. Her mother Eliza Start was from Yorkshire in England, and her father was Nigerian. The family was impoverished and Bassey’s father left the family while she was still an infant. Bassey left school at 14 and worked in a factory to help support her family.

Shirley Bassey attended Moorland Road School and Splott Secondary Modern School in Cardiff. She sang in the school choirs but was often in trouble for singing out of turn.

Shirley Bassey began singing in the working men’s clubs to supplement her family’s income at age 15. In 1953 she performed in a touring variety show based on the life of Al Jolson. At age 16 Bassey became pregnant and returned to Cardiff to work as a waitress. She continued to tour local theatres until in 1955 she was invited to sing at the Adelphi Theatre in London in the Such is Life show. Her performances landed Bassey a recording deal and she released her first song ‘Burn my Candle’. The record sold well but was banned by the BBC because of its suggestive nature.

In 1957 Bassey scored her first top ten hit with the ‘Banana Boat Song’ which reached number eight in the British charts. 1957 saw Bassey debut in America as she recorded in New York and performed in Las Vegas. In 1958 Bassey scored her first number one with ‘As I Love You’. While As I Love You’ sat at number one a second Bassey song, ‘Kiss Me, Honey Honey, Kiss Me’ also rose to number three in the charts. After this Bassey signed with Columbia. In 1960 Bassey made her American TV debut by appearing on the Ed Sullivan Show. 1961 saw Bassey reach number one again with ‘Reach for the Stars/ Climb Ev’ry Mountain’.

Shirley Bassey entered the top 40 of the Billboard Hot 100 with the theme song to the Bond film Goldfinger. Bassey record other memorable songs in this period such as ‘Thunderball’ and ‘Big Spender’, but they did not achieve the same commercial success. In 1968 Bassey became a tax exile from the UK and released a series of songs in Italian that enjoyed chart success in Italy. In 1970 she returned to the UK with a BBC One show and a record breaking run of performances at the Talk of the Town nightclub. Her album ‘Something’ sold well and the title track outsold the Beatles original.

The 1970s seventies saw a string of top five singles and albums for Bassey and in 1971 she recorded her second Bond theme song ‘Diamonds are Forever’. In 1976 The Shirley Bassey Show ran for six episodes on BBC. Bassey again sang the theme song to the Bond film Moonraker, released in 1979. The 1980s saw a decline in output from Bassey but she continued to have success touring throughout the world. She appeared in the 1996 film La Passione and received a Grammy nomination for her ‘Birthday Concert’ live album in 1997.

Shirley Bassey reached number one in the UK dance charts with the song ‘History Repeating.’ Bassey provided the official song to the 1999 Rugby World Cup singing ‘The World in Union’ at the opening match in Cardiff. In 2007 Bassey performed at the Glastonbury festival and marked fifty years in the UK charts with a new song ‘The Living Tree’. In 2012 Bassey performed at a concert to celebrate the Queen of England’s 60th Jubilee. In 2014 Bassey released the album ‘Hello like Before’.

Shirley Bassey's most famous song is Goldfinger the theme song to the Bond film of the same name. It marked her only entry into the American top 40. Other notable works were the Bond themes ‘Moonraker’ and ‘Diamonds Are Forever.’ Bassey also achieved UK number ones with the songs ‘As I Love You’ and ‘Reach for the Stars/Climb Ev’ry Mountain.’

Shirley Bassey has been married twice. She and her first husband Kenneth Hume divorced in 1965 after marrying in 1961. Bassey’s second marriage to Sergio Novak lasted from 1968 till divorce in 1979. Bassey had two daughters, Samantha and Sharon, the identity of their fathers is unknown. Bassey also adopted her grandnephew Mark. In 1985 Samantha Bassey was found dead in the River Avon in England. Repeated police investigations have failed to produce any evidence of foul play, but Bassey has always maintained it was not suicide.

In 1999, Shirley Basse was made a Dame Commander of the British Empire by the Queen of England. The same year she was awarded the Legion d’Honneur by France. In 2000 the Guinness Book of Records announced that Bassey was the most successful British singer of all time. In 2008 the song ‘Goldfinger’ was inducted into the Grammy Hall of Fame.

In 2003, Shirley Bassey raised half a million dollars for her scholarship fund at the Royal Welsh College of Music and Drama and the Noah’s Ark Appeal, which raises funds for a children’s hospital in Wales.

In 1978, Shirley Bassey pleaded guilty to being drunk and disorderly. She had been drunk and verbally abused a police officer. Bassey was named as a co-respondent in the 1965 divorce case between Peter Finch and his wife, Yolande Turner.