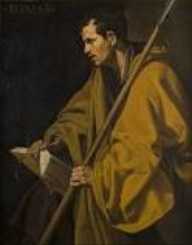 St. Thomas was one of the 12 apostles called by Jesus Christ to help him in his ministry. He is mostly synonymous with disbelief for his doubt about the resurrection of Christ.

St. Thomas also known as Thomas Didymus was born probably in the region of Galilee in the Roman province of Judea. His date of birth is a mystery as his birthplace. His name Thomas is a variation of the Hebrew word Teoma, meaning twin. Didymus also means the same in Greek.

St. Thomas's story is found in the first four books of the New Testament in the Christian Bible. He was a practicing Jew when Jesus chose him with other eleven men to become the first apostles of Christ. He is known as the Doubting Thomas as he did not outrightly believe that Christ had resurrected.

He was the most curious of the twelve apostles. In the Book of John chapter 14, Christ talked of his departure to heaven and his second coming. Christ said that he was going to prepare a place so that when he comes back, he will take them with him. The disciples did not comprehend what their master meant. Thomas asked Christ to elaborate on his speech.  Christ answered his disciples I am the way, truth, and life, no one goes to the Father except through me.

He showed great courage when all the other apostles feared. In the book of John chapter 11, Christ tells the apostles of his wish to visit Lazarus in Jerusalem. The apostles objected fearing for his safety. They said Jerusalem was not safe and the Jews might kill them. Thomas retorted to his fellow apostles “Let us all go to Jerusalem and die with him” In a moment of uncertainty, St. Thomas rallied the other apostles to gain strength and follow Christ.

Doubting Thomas was not with the other disciples in Jerusalem when the resurrected Christ first appeared. The others told Thomas that Christ appeared to them in the room. Thomas dismissed the story as inconsequential. Eight days later, Christ appeared to them when Thomas was with them. Inquisitive in nature, Thomas came forward to inspect the body of Christ. He put his fingers on the scar holes in Christ’s palms and ribs. After his confirmation, Thomas believed in the resurrected Christ. Some Christian quarters condemn this unbelief, while others argue that Thomas exercised due diligence not to follow a wave blindly.

When Christ ascended to heaven, he commissioned his disciple to go and preach the good news to the world. The disciples stayed holed up in Jerusalem until the Jewish persecution of Christians. He started his apostolic preaching in the nearby regions of Syria, Mede, and Persia. Apostle St. Thomas then traveled east to present-day India. He first preached in present-day Kerala where he found a Jewish community. He converted them into Christianity together with some locals. He continued his evangelical preaching throughout India.

Thomas traveled to present day Chennai in India. He evangelized people into Christianity. Some zealous Hindus accused him of belittling one of their deities.

In the year 72, St. Thomas was killed in Chennai. Different theories came up regarding his death. Some said he died after accidentally being shot by a hunter. Another tradition says Thomas was killed by Hindus for his conversion of the local Hindus to Christianity. He was buried in Kerala. The Portuguese built a basilica on his grave and called St Thomas Cathedral.

In recent times debate has raged within the Christian scholars of the authenticity of the Gospel of St. Thomas. This is one of the Gnostic traditions about Christ which was not canonized into the Christian Bible. In the gospel, St. Thomas says that Jesus married a wife probably Mary, the sister of Lazarus. Thomas also casts serious doubts on the original mission of Christ on several occasions. Most scholars dismissed it as lacking spiritual and archaeological support.

St Thomas was and still is one of the most controversial figures in the apostles of Christ. His mission within the group differed from time to time. He displayed extreme characters of faith during his apostolic life. He exuded a strong personality in seeking knowledge during his time with Christ. When the apostles cast lots on the division of apostolic missions, Thomas reluctantly agreed to go out of Jerusalem. This time he showed fear of evangelizing to foreigners. He gained courage and went to India after traveling in familiar regions of greater Syria.