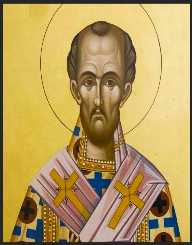 Saint John Chrysostom was a Christian priest and archbishop.

John was born in the year 349 in the city of Antioch, located in modern-day Turkey. His parents were from Syria and they had Greek origins. His father, who was a military officer, died shortly after his birth. He was raised by his mother, whose name was Anthusa. He was baptized in either 368 or 373.

John’s first teacher was Libanius, a Greek pagan. He taught him rhetoric and Greek literature. He then began to study theology at the School of Antioch. There, he studied under the bishop Diodore of Tarsus.

In 375, John became a hermit and ascetic. He devoted all of his time to studying the Bible. He did not sleep or eat much, causing his health to decline. In 381, he became a deacon. He was ordained by the bishop Saint Meletius of Antioch. He then began following the priest Paulinus.

In 386, John became a priest. He was ordained by Evagrius of Antioch. He became well-known in his city because of his elaborate speeches. He was very skilled at talking about stories from the Bible. He spoke about the needs of the poor and he was against the extravagance of the rich. He also wrote a number of Homilies about many parts of the Bible. His rhetoric skills gave him the nickname Chrysostom, meaning ‘golden-mouthed’.

In 397, John became the Archbishop of Constantinople. During his time there, he refused to host extravagant events. This made him unpopular with the rich citizens, as well as with the clergy. He had a big conflict with Theophilus, the Patriarch of Alexandria. He was also against Aelia Eudoxia, the Empress of the Roman Empire. In 403, several of his enemies held a synod with the aim to remove him from his position. He was ultimately exiled to the town of Cususus in Cappadocia. He kept on writing letters during his stay there. They managed to gain great influence in Constantinople.

John was eventually further exiled to the town of Pitiunt, located in modern-day Georgia. He never managed to reach this town. He died during his journey on September 14, 407, near the city of Comana Pontica.

Shortly after John’s death, some of his supporters began to demand his canonization. However, many of his enemies in Constantinople were against that.  Three decades later, the Patriarch of Constantinople accepted the idea.

St. John Chrysostom is recognized as a saint by Orthodox, Catholic, Lutheran, and Anglican churches. The feast days dedicated to him are January 27, January 30, September 14, and November 13.

St. John Chrysostom was initially buried in Comana Pontica, the town where he died. In 438, his relics were taken to Constantinople. His skull was kept at the Monastery of Votapedi in Greece. In 1204, the relics were stolen by Crusaders and transferred to Rome. In 1655, the skull was transferred from Greece to Russia, at the demand of Tsar Alexei Mikhailovich. It is currently kept at the Cathedral of Christ the Saviour in Moscow. In 2004, Pope John Paul returned some of the relics to the Church of St George in Istanbul.

St. John Chrysostom had a great influence on the reformation of the clergy. His liturgies were the inspiration for compositions made by Sergei Rachmaninoff, Pyotr Tchaikovsky, Kyrylo Stetsenko, Arvo Part, and Alexander Grechaninov. There is a legend about his involvement with a princess during his time in the desert.