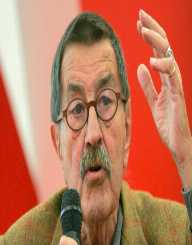 Gunther Grass was a Kashubian, German-speaking novelist, playwright, and artist; he is best known for receiving the 1999 Nobel Prize for Literature.

Grass was born 16 October 1927 in the Free City of Danzig. Danzig at the time was under the control of the League of Nations and although made up largely of ethnic Germans was separated from the country by the Polish Corridor which gave the recently created state of Poland access to the Baltic Sea. Today Danzig is part of Poland and has been renamed Gdansk. His parents were Wilhelm Grass and Helene Grass. Grass’ father was a German Protestant. His mother was a Kashubian-Pole and a Roman Catholic. Grass identified with his mother’s Kashubian lineage and was raised as a Roman Catholic. His parents owned and ran a grocery store.

Grass attended local school until the age of sixteen. At that point, the height of World War II, he became a helper for the German air force and was then conscripted into the labor force. The following year, 1944, he volunteered to join the German Navy, Kriegsmarine, as a crewman on a submarine but was rejected. Instead, he was conscripted into a Waffen SS panzer division. In the final months of the war, Grass was wounded and captured in the Czech Republic by American forces. He was interned in a prisoner of war camp in Bavaria. He was released in 1946 and began work as a miner and also trained as a stonemason.

While working in the chalk mine Grass also began to practice stonemasonry and sculpture. He also became part of 47 Group. 47 Group was a collection of German writers largely made up of prisoners of war who wanted to develop a new national identity and purpose for post-war Germany. The group was against the occupation and partition of Germany and so was censored in its early years. Grass moved to West Berlin in 1953. He studied at the Berlin University of Arts.

He then took up work in a publishing house. His first novel was published in 1959, The Tin Drum. It would form part of his Danzig Trilogy with the novels, Cat and Mouse and Dog Years. The Trilogy focuses on Danzig in the interwar years, through the rise of Nazism and into the Second World War. The books marked Grass as one of the foremost German writers addressing the effects of the period on Germans. His 1977 book, The Flounder, was heavily critiqued for its anti-feminist tones. The book drew from the old folk-tale of the fisherman and his wife. It was not until 1999 that Grass again reached the heights of his Danzig Trilogy. My Century, detailed the violence of the twentieth century and was published in 1999. Grass’ 2002 novel, Crabwalk followed it. Crabwalk returns to Danzig during the Second World War and deals with the sinking of a German refugee ship by a Russian submarine.

In his 2006 memoirs Grass admitted publicly for the first time that he had served in the Waffen SS previously he claimed to have only been an air force assistant. Grass was outspoken on German politics and international politics during his lifetime. He was critical of the reunification of Germany in 1990. He denounced Western hypocrisy in aiding a belligerent Israel which was secretive of its nuclear capabilities and yet ostracised Iran for the same crimes. Grass was declared a person non grata in Israel. His later works often dealt with the European Union and its reaction to economic crisis. He was very critical of the European Union’s treatment of Greece.

In 1954, Grass married Swiss dancer, Anna Schwartz. Together they had four children but divorced in 1978. The following year Grass married his second wife, Ute Grunert. Grass also had two children from extramarital relationships. He died on 13 April 2015 in Lubeck, Germany of a lung infection.

In 1999, Grass received the Nobel Prize for Literature. The Academy stated the award was in recognition for his part in the German literary movement that helped the nation come to terms with its past. Grass was made an honorary citizen of the city of Gdansk.