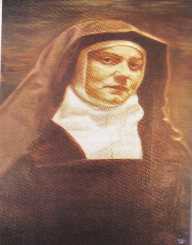 Edith Stein was born on October 12, 1891, in Breslau, Lower Silesia (now Wroclaw, Poland). She was the youngest of 11 children in an observant Jewish family. She was a very gifted child and enjoyed learning. Her mother had a big influence on her education, encouraging the young girl critical thinking. Stein admired her mother’s strong religious beliefs, however, by the time she was a teenager, Stein became an atheist.

Stein’s father died when she was still a young girl. Despite being a widow, her mother was determined to give her children a thorough education. Her mother’s efforts led to young Edith Stein to be enrolled at the University of Breslau.

In 1916, Edith Stein received a doctorate in philosophy from University of Freiburg, for her dissertation On the Problem of Empathy. Beforehand, she interrupted her studies in 1915, to serve as a volunteer for the Red Cross. She nursed in the hospitals at Marisch-Weisskirchen in Moravia. After finishing her doctorate, she became a member of the faculty at the University of Freiburg. She worked as a teaching assistant to the philosopher Edmund Husserl. However, Husserl did not support her submitted habilitation thesis in 1918, and her other thesis Sentient Causality, which she submitted at the University of Göttingen was also rejected since she was a woman.

Edith Stein spent her summer holidays in Bad Bergzabern in 1921, where she red the autobiography of the mystic St. Teresa of Avila. The autobiography prompted Stein to converse with Roman Catholicism, and she was baptized in 1922. She immediately sought entry to the religious life and obtained a teaching position at the Dominican nun's school in Speyer. She worked at the school from 1923 to 1931. During this time, she translated Thomas Aquinas De Veritate into German and familiarized herself with Roman Catholic philosophy.

In 1932, Edith Stein became a lecturer at the Catholic Churches Institute for Scientific Pedagogy in Münster, Germany. However, after the anti-Semitic legislation by the Nazi government, she had to resign from the post the following year. She wrote a letter to Pope Pius XI, denouncing the Nazi regime and asking the Pope also to denounce the regime openly. The letter never received an answer, but in 1937, the Pope issued an encyclical written in German- With Burning Anxiety, which criticized Nazism and condemned antisemitism.

In 1933, Edith Stein entered the Discalced Carmelite monastery St. Maria vom Frieden in Cologne and took the religious name Teresa Benedicta of the Cross. While at the monastery, she wrote her metaphysical book Finite and Eternal Being. To protect Stein and her sister, her Order transferred them to Discalced Carmelite monastery in Echt, Netherlands. There Stein wrote her book Studies on John of the Cross; The Science of the Cross. Her move to Echt made her more devoted, and she became more subscribed to the Carmelite lifestyle. She became an instructor at the convent in Echt and began teaching Latin and philosophy.

Edith Stein believed that she would not survive the Nazi regime. Therefore she created a will and wrote to Prioress a request to allow her to offer herself to the heart of Jesus and sacrifice atonement for true peace. She began training herself for life in a concentration camp, by enduring cold and hunger, after Nazi’s invaded the Netherlands in 1940.

In 1942, the Dutch Bishop’s Conference publicly condemned Nazi racism. In response to this, the Reishskommissar of the Netherlands, Arthur Seyss- Inguart ordered the arrest of all Jewish converts who were previously spared. Stein was arrested on 2 August 1942 and imprisoned in the concentration camp of Amersfoort and Westerbork, before being deported to Auschwitz. Edith Stein was offered assistance to escape, but she refused. It is believed, that Stein and her sister were killed in a mass gas chamber on 9 August 1942. Stein was beatified as a martyr on May 1, 1987, in Cologne, Germany by Pope John Paul II and then canonized in 1998, on grounds for miraculously saving a girl who had swallowed a large amount of paracetamol. The girl had hepatic necrosis, but in the care of Stein, she quickly recovered. She is one of the six patron saints of Europe.