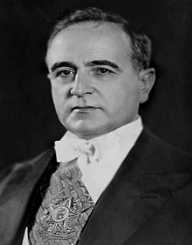 Getúlio Dornelles Vargas was a Brazilian politician and lawyer. Born on April 19, 1882, he served as the President of Brazil in two different periods. The first period was from 1930–1945 of which from 1930 - 1934 was as interim president. He then became a constitutional president from 1934 to 1937. However, after his tenure, he seized power and became a dictator from 1937 to 1945 when he was overthrown in a coup. In 1951, Vargas returned to power as an elected president serving until 1954 when he committed suicide.

Vargas was an anti-communist who promoted populism, industrialization, nationalism, and social welfare. Affectionately known “Father of the Poor” his tenure brought significant social and economic changes in Brazil enhancing modernization.

Getúlio Dornelles Vargas was born on April 19, 1882, in São Borja, Rio Grande do Sul in Brazil. His parents were Cândida Dornelles and Manuel do Nascimento Vargas. At the age of 16, Vegas opted for a military career. He, therefore, enlisted in the sixth infantry battalion as a private in 1899. Subsequently, he joined military college at Rio Pardo. However, he later decided to pursue law. He studied Porto Alegre Law School in Rio Grande. Following his graduation in 1908, Vegas became a district attorney. The following year, he opened a law office in São Borja. During this period, Vegas has gained an interest in politics.

Vegas won elections to the Legislative Assembly of Rio Grande do Sul and to the federal Chamber of Deputies by 1922. He rose through the political circles rapidly. In 1926, President Luis appointed him as the Finance  Secretary. However, he resigned in 1928, to contest in the gubernatorial elections in Rio Grande do Sul. As a governor, he improved agriculture, education, and infrastructure.

In 1930, Vargas unsuccessfully contested for the Brazil presidency. He lost the elections to Júlio Prestes. The election, characterized by fraud and discontents led to a coup in October 1930 that ousted the ruling government. Vargas, therefore, became the interim president. Vargas survived various machinations to topple his government including the 1932 São Paulo-led revolt. He ruled until 1934 when he won a legitimate election to become the president. In 1935, he survived an attempted communist revolution. Vargas himself led a coup d’état on November 10, 1937, that ousted constitutional rule and introduced the populist authoritarian Estado Novo (“New State”). He, therefore, stayed in power until October 29, 1945, when a coup d’état overthrew his government.

Despite being ousted, Vargas still maintained substantial support in Brazil. In December 1945, he won elections as a senator from Rio Grande do Sul. Going into a semi-retirement, he returned into full-time politics in 1950. He contested on the ticket of the Brazilian Labour Party in the presidential elections that year and won. Vargas assumed office on January 31, 1951. This time, he did not have autonomous power to do his will as the Congress restrained his powers. As a result, he could not meet the high demands of the people that voted him into power. Growing numbers of criticism plunge his government into unpopularity among the people and later the army. The army, therefore, demanded his resignation.

Vargas could not stand the high criticisms of his government and the call from the armed forces for his resignation. He, therefore, chose “the easy way out.” On August 24, 1954, Vargas committed suicide by shooting himself in the chest.

Vargas was a populist and introduced several interventions that sought to address the needs of the poor. He was also an anti-communist and adopted a corporatism approach. Vargas introduced tax breaks, lowered duties, and import quotas to ensure smooth industrialization and modernization. He introduced various electoral reforms including secret ballot and women suffrage.

Vargas also reduced the voting age from 21 to 18. During his return to power in 1951, he instead pursued a nationalist policy, which resulted in animosity with the United States. He turned away from foreign dependency as pursued by his predecessor President Eurico Dutra. Relying on the country’s natural resources, he established the Petrobrás (Brazilian Petroleum), primarily owned by the Brazilian government.