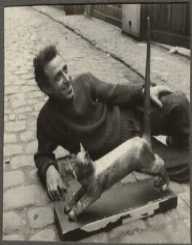 Constantine Andreou’s parents migrated to the Brazilian city of Sao Paulo in the years leading to his birth on 24th March 1917. His parents left for home in Greece eight years after his birth and took up residence in the famed city of Athens. During this growing up years, Andreou took to crafts, making furniture and other carpentry works. Andreou also took up classes as a technical design student, and after graduating in 1935, he enrolled for sculpture studies. It was his exploits that in sculpture that was to become the basis for his embracing global limelight years down the line. Constantine Andreou took the national art competition in Greece in the year 1939 to showcase his designs, but this was interrupted when the WW2 got to his shores. Andreou was dragged into the war when the Italian Army invaded his country. He joined the Greek resistance front but continued his art practice by the side.

Constantine Andreou's entrance at the national art competition in Greece was controversial in the year 1942 as the judges regarded his work as too close to reality. They felt he had cheated, but he was rescued by other major Greek artists of his era. The trio of Nikos Nikolaou, Memos Makris, and John Miltiades gave him a backing to admit his work.
Andreou's animated work was so exemplary that he was granted a scholarship in 1945 so he could proceed to France for deepened art studies.

Constantine Andreou settled fast in France, and by 1947, he developed a technique of using welded copper sheets in his sculpturing forms. This approach was groundbreaking and a leap away from the prevailing trends of the time. Constantine Andreou developed a friendship with the acclaimed Le Corbusier, and this helped him in deepening his radical approach to creative art. Andreou's awareness of his Greek heritage was profound, and once, he told Le Corbusier that he had an innate knowledge of original art as Greek national. He approached architecture as monumental sculpture. His view was that sculpture was conversely subject to architectural laws and paradigm.

Constantine Andreou raked up renown in Paris in no time and became a member of a philosophy panel that examined a wide range of issues at Saint-Germain-des-Pres. It is noteworthy that Jean-Paul Sartre was also a member of this panel. The first exhibition that Constantine Andreou made in Paris was in the year 1951. He put his artworks under public searchlight to show how rapid his style has transformed. He was also part of a group exhibition showcasing Seven Greek Sculptors. He was portrayed as a foremost Greek Sculptor with varied, rich and successful work in the French capital.

As the 1960s dawned, Andreou was already in the limelight and enjoyed the prominence of such greats as Gastaud, Picasso, and Mondrian. He was also in touch with his home base in Greece during the period he lived in Paris.Andreou embarked on visits to Greece to visit his loved ones and friends at intervals. He acquired a medieval winery in Aegina, a Greek island in the year 1977. Andreou later converted the winery to a house.

Constantine Andreou's stature in the Paris arts community had soared over the next two decades into the 1980s. He became the chair of sculpture Autumn Salon that held in Paris in 1982.

The time he spent working with the likes of the art genius, Picasso and the equally acclaimed Le Corbusier, is a milestone that is not forgotten in his life. The periodical, Les Temps Modernes highlighted the works of Andreou and rightly accorded him his due acclaim. By the turn of 1999, La Ville-du-Bois honored Andreou by naming the precinct library after him. This was the place he lived while in France. Andreou was back to Greece for retirement in 2002, and he put his energy into starting a foundation. The Costas Andreou Foundation was launched in 2004. The foundation set out to select and highlight up and coming artists within a three cycle continually. The focus is on painting and sculpturing art forms.Constantine Andreou's foundation awarded its winners for the first time in the year 2008 and had continued ever since.

Constantine Andreou also got recognitions and awards throughout his lifetime beginning with the 1998 Gran Prix d’Antoine Pevsner. Two years down the line, he was awarded the Croix de Chevalier de la Légion d’honneur in the year 2000. In 2005, he got the Officier de l’Ordre des Arts et des Lettres, 2005. These awards were for his remarkable contribution to the field of literature and the arts. These were national awards of the highest order.

The attribution given to Constantine Andreou is remarkable, and he is recognized as having played a leading role in the evolution and propagation of art in the 20th century. His painting and sculpture were eminent in a field of other distinguished greats. Andreou's career spread over the course of sixty years, and he was a major contributor to the advancement of the French art league. It is also documented that the WW2 became a distraction for the world but could not deter Constantine Andreou from pursuing his first love.

He diligently pursued a vision of expertise and proficiency that carved a niche he will always be remembered for enduringly. The artworks of Andreou was put on display in a retrospective fashion first in April 2009. This was at Greece hosted Evgenidio Foundation, which took place in Athens.