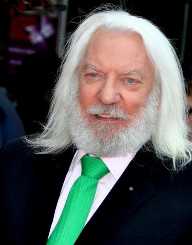 Donald Sutherland was born on 17th July 1935, to Frederick and Dorothy Sutherland. He was born in Saint John, New Brunswick, in Canada. His father was a salesman who managed the local gas and electricity company, as well as the local bus company.

He went to Bridgewater High School, and after graduation, he studied at Victoria College, University of Toronto. He graduated with a double degree in Engineering and Drama.

In 1957, Donald Sutherland went to England where he studied at the London Academy of Music and Dramatic Art (LAMDA).

Donald Sutherland dropped out of the LAMDA and moved to Scotland where he spent 18 months at the Perth Repertory Theatre.

As the 1960s got underway, Donald Sutherland began to win small roles in films and on television. He gradually became more well-known, and his break came when he won a role in The Dirty Dozen, alongside actors such as Lee Marvin and Charles Bronson. The movie was released in 1967 and was the 5th highest grossing movie for that year.

The following year, Donald Sutherland left the UK and moved to Hollywood. He quickly picked up two starring film roles. The first was as Hawkeye in MASH, and the other was as Oddball in Kelly’s Heroes. Both movies were released in 1970. His career was well underway, and he starred in several movies with Jane Fonda, including Klute(1971) and Steelyard Blues (1973), and they worked together on an anti-Vietnam war documentary called F.T.A. in 1972.

Donald Sutherland went from strength to strength and starred in many movies from the 1970s through to the present day. In his more recent movie roles, he has been in well-known movies such as The Italian Job (2003), Pride & Prejudice (2005), and The Hunger Games series of movies (2012 – 2015).

Donald Sutherland has won many awards and received various honors, including:

Donald Sutherland's third marriage was to Francine Racette in 1972. She is a French-Canadian actress, and the couple is still together.

Donald Sutherland had two children with Douglas, Kiefer, and Rachel. Kiefer is a very accomplished actor in his own right. He also has three sons with his current wife, Francine. Their names are Rossif, Angus, and Roed.