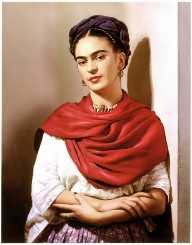 Frida Kahlo is regarded as one of the greatest artists in history. Her painting career began after she was involved in a bus accident and she got injured. Later on, she engaged in politics and got married to Diego Rivera, a communist. She died on July 13th, 1954 at the age of 47.

Frida Kahlo was born on July 6th, in 1907. She was born in Coyoacan which was one of the villages in Mexico City. Her father, Guillermo Kahlo was a photographer. Her mother was called Guillermo Kahlo. Kahlo had two sisters, Matilde and Adriana, who were older than her and Cristina the youngest.

Frida Kahlo enrolled in one of Mexico’s leading schools while she was young. During this period, Mexican revolution was on the rise and Kahlo witnessed several incidences of violence. While in school Kahlo was known as a cheerful individual with a high-spirited nature. Her inclination to traditional clothes was also an aspect that made her stand out in school.

Kahlo was also passionate about politics while in school. This influenced the type of friends that she chose to hang out with. She entered into an affair with one of the students in her social circle, Alejandro Gómez Arias. In late 1925 when Kahlo was traveling with her boyfriend on a bus, they were involved in an accident. She sustained serious injuries as a result of the accident and was hospitalized at the Red Cross Hospital located at the heart of Mexico’s city. She spent several weeks here before finally being discharged. During her recovery period, she began her portrait paintings. Later on, she engaged actively in politics after which she united with Mexican Communist Party.

After joining the MCP, Frida Kahlo began meeting with public figures including renowned artists and several activists. In 1928, Kahlo crossed paths with Diego Rivera after being introduced while attending Tina Modotti’s, (a famous photographer) party. Rivera was a celebrated communist, and he was also known for his artistic talents. Rivera was impressed by Kahlo’s works of art. Soon, the two entered into a relationship together in spite of their age difference. Kahlo was young while Rivera was 42 years old and considered as a womanizer by many. Kahlo’s parents more so her mother did not approve of this relationship. Her father simply approved the affair for reasons that Rivera would take charge of paying for Kahlo’s medical expenses.

After moving to San Francisco in 1930, Kahlo began showcasing her artistic talent by drawing more and more. She released Frieda and Diego Rivera for public exhibition in 1930. She kept improving on her painting skills as in 1932; she applied more graphics and added more artistic elements in her painting Henry Ford Hospital.

In 1929, Frida Kahlo wedded Rivera. Their relationship was not fulfilling as Kahlo was considered a bi-sexual. This led to their separation in 1939. The accident that Kahlo had faced while young made her go through severe health problems later in her career and personal life.

On July 13th, 1954, Frida Kahlo suffered lung failure leading to her early death at the age of 47.