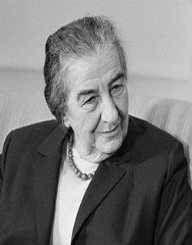 On March 17, 1969, she was elected as prime minister of Israel, becoming the first woman first woman to rise to such an office. Known as the “Iron Lady” of Israeli politics, she resigned from her position in 1974, a year after the Yom Kippur War.

Golda Meir was born Golda Mabovitch on May 3, 1898, in Kiev, Ukraine (then in the Russian Empire). She was born to Blume Neiditch and Moshe Mabovitch into a Jewish family. Her father was a carpenter. She had two siblings Sheyna and Tzipke. In 1903, her father traveled to the United States, settling in New York to look for a job.

The rest of the family moved to Pinsk. In 1906, the family joined him in the US settling in Milwaukee, Wisconsin. Golda received education at the Fourth Street Grade School (presently Golda Meir School) from 1906 to 1912. She continued her education at North Division High School.

After enduringenough pressure from her mother to marry, she moved to Denver, Colorado, to live with her sister, Sheyna Korngold, who was married. Golda Meir was exposed to debates on different fields including Zionism, and literature as the Korngold's home usually hosted intellectual evenings. These debates would shape Meir’s future thoughts and convictions.

She graduated from North Division High School in 1915. She then enrolled at the Milwaukee State Normal School (currently University of Wisconsin-Milwaukee) in1918. Meir joined several groups related to Zionism and embraced Labour and Social Zionism.

Golda Meir moved to Palestine with her husband and sister Sheynain 1921. While there, they joined a kibbutz Merhavia in the Jezreel Valley after previous rejection.

Golda Meir showed strong leadership skills during this period, leading to her selection by the kibbutz as a representative to the Histadrut, the General Federation of Labour. They left the kibbutz to Tel Aviv in 1924 and later settled in Jerusalem.

Golda Meir won an election as secretary of MoetzetHaPoalot (Working Women’s Council) in 1928. Her position required that she spend two years as an envoy to the United States from 1932 to 1934. After her two years in the US, she returned to join the Executive Committee of the Histadrut rising to its Political Department.

She took several other positions including the head of the Jewish Agency Political Department and was a vibrant member of the Jews in Palestine until gaining an independent Israel in 1948.

After Israel gained independence, ending the British mandate, Meir traveled to the United States, where she helped in raising funds of $50,000,000 to purchase arms to protect the young country. On May 14, 1948, she was one of the 24 signatories of the Israeli Declaration of Independence.

Golda Meir was appointed the minister plenipotentiary to the Soviet Union serving from September 2, 1948, to March 1949. She won elections to the Knesset on the ticket of Mapai in 1949 and served in that capacity until 1974.

That same year, she was appointed Minister of Labour serving until 1956. Her next position was as a Foreign Minister under Prime Minister David Ben-Gurion.

With this position, she established strong ties with other countries, especially with newly independent African states. She retired from the position in January 1966, citing ill health. She later returned to hold the position of secretary general of Mapai.

Golda Meir was elected as the Prime Minister after the death of Levi Eshkol on February 26, 1969. She took office on March 17, 1969, and served until her resignation in 1974.

After taking office, she met with several world leaders including US President, Richard Nixon, and chancellor of West Germany, Willy Brandt, during which she promoted her plans for peace in the Middle East. She resigned from the position on April 11, 1974, after the Yom Kippur War.

Golda Meir married a sign painter Morris Meyerson, on December 24, 1917. The couple had two children Menachem and Sarah. Morris died in 1951. Golda Meir died of lymphatic cancer on December 8, 1978, at age 80 in Jerusalem. She was interred on Mount Herzl in Jerusalem.