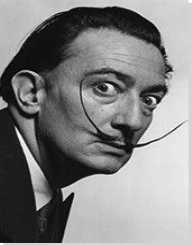 Salvador Dali was born on May 11, 1904, in Figueres, Spain. His parents were Salvador Dali i Cusi and Felipa Domenech Ferres.  He also had an older brother, also named Salvador, who died around nine months before his birth. Since he was a young child, his parents told him that he was the reincarnation of his brother, which he believed until his death. Salvador Dali later had a younger sister, Ana Maria. Felipa died when her son was still a teenager, which hurt him deeply. His rather later remarried to Felipa’s sister.

Salvador Dali attended drawing school as a child. He would regularly visit another famous artist, Ramon Pichot, with his family, to gain more artistic training. Throughout his artistic education, Salvador Dali dabbled in drawing, charcoal art, and painting. His talents were obvious, and he had his first public exhibition in 1919 when he was still a teenager.

Salvador Dali enrolled in the Real Academia de Bellas Artes de San Fernando in 1922. It was at school where he learned about the cubist style of art. He was later expelled from the school in 1926. In the same year, he visited the famous painter, Pablo Picasso. It was after meeting with Picasso that Dali began to develop his art style more. He experimented with a few things, but eventually, he became famous for his paintings in the surrealism style.

Salvador Dali was known both for the way he painted real-life objects in a way in which they would never be seen in real life. One of this most famous paintings, The Persistence of Memory, shows clocks that seem to be melting.

He also drew inspiration from animals, the Bible, and historical events. Some of these paintings include The Elephants, Christ of Saint John of the Cross, and The Discovery of America by Christopher Columbus. Not all of his paintings were as abstract as others. He was also known to be able to paint so realistically that it looked like a picture had been taken. Some of these paintings include the Basket of Bread and Girl at the Window.

Salvador Dali began to have more exhibitions throughout the 1930’s and onward. In the 1930’s, Dali had a falling out with his father, which affected both his personal life and his artwork. His artwork began to deal more with surrealism than anything else. Many artists and critics thought him to be odd for doing this, and many even questioned his morals and political views because of the things he painted. Others accused him of only painting for profit instead of for art. This hurt his reputation as an artist in the late 1930’s through the 1940’s.

In the late 1940’s through the 1970’s, Salvador Dali began to shift his artwork into working on religious and scientific paintings. Some of these paintings include the famous Corpus Hypercubicus and The Hallucinogenic Toreador. Throughout his painting career, he produced over 1500 paintings.

While Salvador Dali focused mainly on painting, he also dabbled in film. He wrote five-pieces in his lifetime from 1929 to 1968: Un Chien Andalou, L'Âge d’Or, and Improvisation Sur un Dimanche après-midi.

He also acted in three pieces, including his film Un Chien Andalou. He also acted in Fun and Games for Everyone in 1986, and As Far as Love Can Go in 1971. Salvador Dali also directed one documentary, Impressions de la Haute Mongolie. After his death, he was credited with writing two stories, which were turned into films: Babaouo and Destino. He has also created numerous sets for films. While working in film, he got to know some big-name stars, like Luis Bunuel and Alfred Hitchcock.

Salvador Dali was not only a painter but also a writer. He published a few books which had pictures of his paintings inside, but he wrote some autobiographical works, like, The Secret Life of Salvador Dali. Some of his other books include Diary of a Genius, Hidden Faces, and Wine, Women, and Words.

Salvador Dali married Elena Ivanovna Diakonova in 1934. She was the inspiration for one of his famous paintings, Gala in the Window, which he painted a year before their marriage. Salvador Dali had no children. Elena died in 1982, which crushed Dali.

After his wife’s death, Salvador Dali no longer wished to live. He lived with depression until he suffered from heart failure and died on 23 January 1988, in Figueres, Spain.