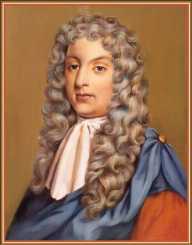 Jean-Baptiste Lully was born on November 28, 1632, in Florence, Grand Duchy of Tuscany, Italy. He was born as Giovanni Battista Lulli to an Italian family of millers. He received very little education during his childhood but learnt to play guitar and violin and was taught music lessons early on. He caught the eye of Roger de Lorraine, Chevalier de Guise, son of Charles, Duke of Guise in one of his performances during the celebration of Mardi Gras.

Guise was looking for someone who could speak in Italian with his niece, Mademoiselle de Montpensier. He took Lully to Paris and put Jean-Baptiste Lully in the service of Mademoiselle as a scullery boy. Lully served Mademoiselle from 1647 till her exile in 1652. He utilized this period by practicing with some renowned musicians working in the Mademoiselle's household music team at that time, thereby, sharpening and honing his music skills. His talent as a violinist, guitarist and dancer earned him the nicknames ‘Baptiste’ and ‘Le grand baladin’ (great street-artist).

It was during February 1653, when young Louis XIV noticed Lully dancing with him in the Ballet Royal de la Nuit. Jean-Baptiste Lully was made royal composer for instrumental music by Louis XIV. His vocal and instrumental music gradually started gaining wide popularity in Court Ballets and made him an essential part of the group. In 1661, Louis XIV took over the reins of the Government. He appointed Lully as the Superintendent of the Royal Music and Music Master of the Royal Family. During the 1650s and 1660s, Lully composed many ballets for the king, but with the passage of time, his interest shifted more on opera.

Jean-Baptiste Lully is regarded as the Founder of French Opera. He made several improvements in the compositions of the orchestra and also added several new musical instruments. As the superintendent of the royal music, he published the trios and dances he wrote for the court. He also started controlling the Great Violins, although he preferred Little Violins for court ballets. In 1653, Louis XIV made him director of his violin orchestra and Lully was at his innovative best in this respect also.

Jean-Baptiste Lully started collaborating with playwright Molière beginning with the play ‘Les Fâcheux’ from 1661. In 1664, the play ‘Le Mariage forcé’ bore the signature of the maturity of their collaboration. They continued in the same vein and produced many more collaborations, some at the royal court and some others in the form of incidental music for plays. In 1672, Lully’s partnership with Molière ended. Soon, Lully became the Director of the Royal Opera. He stamped his authority and protected his monopoly vehemently over the new genre of opera producing a new opera almost every year starting from 1673 to 1687.

A one-act comedy ballet titled ‘Le Mariage Force’ was jointly composed by Lully and Molière. It was publicly released at the Theatre Palais Royal in February 1664.

In 1667, Jean-Baptiste Lully composed music for ‘Pastoral Comique,' a solo work by Molière.

Cadmus et Hermione’ is considered one of his best works. The opera is a love story of King Cadmus and Hermione, daughter of Venus and Mars. The opera was the first in a new form invented by Lully and is called ‘tragedie en musique.’

One of Jean-Baptiste Lully's most beautiful work ‘Plaude Laetare Gallia' was written to celebrate the baptism of King Louis XIV’s son in 1668.

In 1661, Jean-Baptiste Lully was naturalized as a French Citizen. In 1662, he married Madeleine Lambert, daughter of Michel Lambert, renowned singer and chief musician of the royal court. They were blessed with six children. Among these six, three went on to become musicians at the French court.

Lully was infamous for leading a lustful life having sexual relationships with both men and women. King Louis XIV was very displeased with the dissolute lifestyle of Lully and at one point of time chose to show his annoyance by not inviting him to perform Armide at Versailles. However, it is believed that their friendship remained unaffected in spite of all these controversies.

Jean-Baptiste Lully died on 22 March 1687. The death was a result of a freak injury he suffered during one of his performances in January 1687. He was enthusiastically conducting an orchestra called ‘Te Deum.’ The orchestra was being performed to celebrate King Louis XIV’s recovery from surgery. He stuck his toe instead of the floor forcefully by his conducting stick. It resulted in a severe injury and doctors advised him to amputate his toe. As he was not ready to sever the same, the condition of the wound worsened and gangrene set in. He died after two months due to blood poisoning.

Jean-Baptiste Lully was a master of powerful music. He showed livelier fast and slow movements in his unique compositions. The music also reflected a deeply emotional character. It led to a full revolution in the style of the court dances. The two distinctive types of music, a flexible and expressive Italian style and the traditional French style were efficiently blended by Lully making his style of music one of its kind.