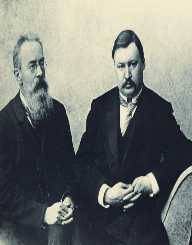 Aleksandr Borodin was a prominent Russian romantic composer, doctor and chemist and a women’s right advocate. Born on November 12, 1833, and of a Georgian origin, Aleksandr Borodin was among The Mighty Handful, a group of prominent 19th-century composers. Members of the group were able to shun the Western Europe model of music and were committed to producing solely Russian kind of classical music. The talented composer is best known for his two string quartets, the opera, Prince Igor, In the Steppes of Central Asia and his symphonies. The US musical Kismet adapted Prince Igor and the string quartets. With his great interest in promoting education and his women right advocacy, Borodin established the School of Medicine for Women in St Petersburg.

Aleksandr Borodin was born on November 12, 1833, in Saint Petersburg. He was an illegitimate son of Georgian nobleman, Luka Stepanovich Gedevanishvili and the Russian Evdokia Konstantinovna Antonova who was married at the time. Due to his illegitimacy status, Luka registered him as the son of his Russian serfs, Porfiry Borodin, who gave him his surname. Aleksandr Borodin and his Porfiry then became serfs of Luka until age 7 when he was Luka provided money and housing for him and his mother. Aleksandr Borodin, however, saw his mother as his aunt and Evdokia never publicly regarded him as her son.

Aleksandr Borodin’ status prevented him from attended any prominent gymnasium, but through private tutoring, he had very good education at home. He enrolled in the Medical-Surgical Academy in St Petersburg in 1850 to pursue chemistry. He spent a year as a surgeon in a military hospital after his graduation. He then embarked on a three-year advanced scientific study in Western Europe. Upon his return to St Petersburg in 1862, Aleksandr Borodin was appointed the chair in chemistry at the Imperial Medical-Surgery Academy. He throughout his scientific career promoted the education of other, embarked on research and served as a lecture. In 1872, he rendered medical courses for women. In 1862, Borodin studied music composition under Mily Balakirev.


Career As a Chemist

In 1862, Aleksandr Borodin began to study music under Mily Balakirev. His maiden composition Symphony No.1 was in E-flat major, first performed in 1869. Aleksandr Borodin then worked on the opera Prince Igor in1868. The opera is regarded as one of his finest work and in consonance with style making it one of the important historical Russian opera. However, Aleksandr Borodin could not fully complete it before his death so Rimsky-Korsakov ad Glazunov took over with the completion. In 1877, Aleksandr Borodin released the Symphony No.2 done in B minor and released under Eduard Napravik. The composition was however not successful until some re-orchestration was done and performed by the Free Music School under Rimsky-Korsakov in 1879.

A year on, he came out with the symphonic poem, In the Steppes of Central Asia. His third symphony was however left unfinished as he died before it could be finished. Although the Five, of which Aleksandr Borodin was a member, was not enthused with chamber music, Borodin defiled that to come out with his First String Quartet in 1875. It followed it with the Second Quartet in 1881. In 1880, Aleksandr Borodin made a maiden performance outside Russia when he performed the Symphony No.1 in Germany through the initiative of Franz Liszt. Aleksandr Borodin followed it with performances in Belgium and Argentina through the Comtesse de Mercy-Argenteau. In 1953, his compositions were adapted in musical Kismet by Robert Wright and George Forrest. He was posthumously awarded a Tony Award in 1954.

In 1863, Aleksandr Borodin was married to pianist Ekaterina Protopopova. The couple had a daughter, Gania. He died on February 27, 1887, and was interred at the Tikhvin Cemetry, Alexander Nevsky Monastery in Saint Petersburg. He had suffered poor health with a battle of cholera and minor heart attacks.