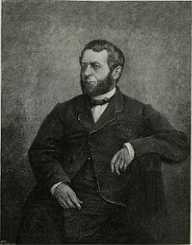 Publishing company founder Charles Scribner was born on the 21 February 1821 in New York to Betsey Hawley and Uriah Rogers Scribner.

Charles Scribner was educated at the Lawrenceville School (1834-1837), studied for 12 months at New York University and enrolled at Princeton University (1840).

After graduating from Princeton, Charles Scribner commenced studying at law school but left because of ill health and travelled to Europe. Returning home, he formed a publishing house with Isaac D. Baker which they named Baker and Scribner.

Baker and Scribner concentrated solely on publishing and focused on contemporary authors and religious books. Baker died in 1850, and Scribner changed the name of the company to Charles Scribner and Company. In 1857, he went into partnership with Charles Welford importing foreign books. In the mid-1860s, the company expanded into the magazine publishing business.