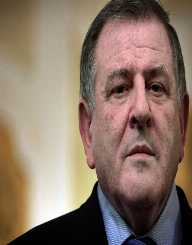 Michal Kovac was the first President of post-communist Slovakia, where he served for five years since 1993.

Michal Kovac was born on the fifth of August 1930, in Lubisa, a village near Humenne. in then Czechoslovakia. Michal Kovac grew up poor and was raised by his mother and relatives. Michal never knew his father. Michal Kovac survived the war, and in 1944 the Kovac family left for Michalovce, with the war trailing behind them. The fourteen-year-old returned a month after the war, to find the house still standing. After the war, the Czechoslovak federation was renewed into a democratic country. But it was overthrown by the Communist Party in February 1948, becoming a satellite state of the Soviet Union.

Michal Kovac was admitted into  Secondary School of Economics in Bratislava (now University of Economics)  in 1951. He graduated three years later.

Michal Kovac started work at the Department of Finance and Credit in a bank after graduation. Moving onto Státní banka ?eskoslovenská.

He was a lecturer in Cuba in 1965 for a year, and after that, he moved to London, where he was was Deputy of Zivnostenska bank there.

In 1948, eighteen- year- old Michal joined the Communist Party. Around 1968, there were changes in the party, Michal welcomed the democratization process that was happening until Warsaw Pact troops occupied Czechoslovakia. Previously slated as the Slovak candidate for the position as governor of the Czechoslovak state bank, he was taken off the list in 1969, returning to his previous role as director of a regional branch of the state bank. Michal Kovac was briefly a researcher at the Research Institute for Finance and Credit. The next year, he was expelled from the Communist Party for supporting the democratization process and was given the role as Section Chief in the National Bank.

In 1989, The Velvet Revolution allowed Michal to quit his job to work as Finance Minister of the new Slovak (Socialist) Republic, from December 1989. Czechoslovakia had its first free election in 1990. In the same year, he was made a deputy to the Federal Assembly of Czechoslovakia, its highest legislative institution. Early 1991, Movement for a Democratic Slovakia was founded, and Michal became vice- chairman to his friend Vladimir Meciar. When the party won the election in 1992, he was  Chairman of the Federal Assembly for six months, preparing for the Dissolution of Czechoslovakia into Czech and Slovak.

Michal Kovac was the first president, elected by the National Council of Slovakia in February 1993, after the Velvet Divorce. Issues arose soon after, as he opposed of Prime Minister Vladimír Meciar’s more authoritarian rule. The conflict peaked in 1995 when the party canceled Michal’s formal membership in the party. In 1995, his son was kidnapped and taken to Austria, the kidnapping and accusation of financial crimes by the German were never fully investigated. Michal Kovac the opposition parties and the Austrian court pointed fingers at the Slovak intelligence service for the incident but was prevented justice by the declaration of self-amnesty by the Prime Minister Meciar in 1998. After the presidential term in 1998, Michal lost in the first direct Slovak presidential election.

Michal Kovac was briefly replaced by Meciar before the seat was won by Mikulas Dzurinda of the Slovak Democratic Coalition. Michal retired from the public eye, appearing only on symbolic events. He appeared in One Day President in 1995.

Michal Kovac married Emília Kovacova, who was a University professor. The couple had two children, Juraj and Michael. In 2008, Michal was diagnosed with Parkinson’s disease. Michal Kovac died of heart failure, compounded by Parkinson’s on 5th October 2016. He was died in St. John’s Hospital in Michala, as he was admitted there a week before heart problems.

For his work in Velvet Divorce, and encouraging democracy. Michal was awarded USA’s   Special Contribution to International Understanding by Institute of East-West Studies Institute, and Great Cross of Merit from the Polish Republic. Michal Kovac also had State Order of the Order of the White Cross, and the Order of the White Eagle by the Polish President. Michal also had awards by Malta and Bulgaria. The awards were for his efforts in opposing authoritarian rule and support democracy.