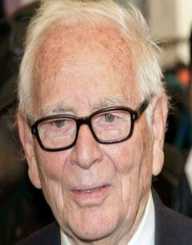 Pierre Cardin was born as Pietre Cardin on 2nd July 1922, in San Biagio di Callalta, Italy. He came from a wealthy family, with his father being a French wine merchant. Although his father wanted him to study architecture, Cardin had other ideas. From a young age, he had a keen interest in dressmaking.

Cardin did his schooling in France and began his clothier’s apprenticeship at the age of 14.

Pietro Cardin moved to Vichy in 1939 where he began work for a tailor making suits for women. In 1945, Cardin moved to Paris. He studied architecture and worked for Paquin, one of the fashion houses, at the same time.

Cardin worked with Elsa Schiaparelli, one of the most famous fashion designers of the period, and in 1947, he became head of Christian Dior’s tailleure atelier. In 1950, Cardin established his own house, The House of Cardin. He launched his career in 1951 when he designed approximately 30 costumes for a famous masquerade ball being held at Palazzo Labia in Venice.

In 1953 he began designing haute couture, and in 1959, he was the first designer to take his exclusive fashions to Japan.

In 1966, Cardin resigned from the Chambre Syndicate, the governing body for the French fashion industry, and began to show his collections in his venue.

Haute couture began to decline in popularity as the demand for ready-to-wear garments grew. Pietro Cardin was continually on the cutting edge of the industry, leading the way with things like new hem lines, adding fringes to the hem lines, creating batwing sleeves, and putting slits in skirts.

Pierre Cardin very smartly used his name as his brand. After he was established in the haute couture and high-end fashion industry, in the 1960s he moved into the perfume and cosmetics industry, with great success.

After 1988, the brand was licensed extensively, which eventually diluted the exclusivity it originally had. The offset, of course, was the incredible income that came with the licensing. Cardin’s annual revenue was estimated to be over $10 million dollars.

Cardin put his business on the market in 2011 but failed to sell it for the one billion euros value he had set on it.

Another area of Cardin’s business saw him sign a contract with American Motors Corporation (AMC). Cardin designed the interiors of different models of cars including the Javelin, and muscle cars.

In 1981, Cardin bought Maxim’s restaurants chain and expanded them into New York, London and China. He also owns the Maxim’s Hotels chain.

In 2001, Pierre Cardin moved into real estate, buying a castle in Lacoste, Vaucluse, which was in ruins. It was once lived in by the Marquis de Sade. Cardin has started renovating the castle and held music and dance festivals there on occasion.

Among his awards and honors, Pierre Cardin was bestowed with the Commander of the Order of Cultural Merit by Monaco in 2007.

Cardin worked with the Red Cross during World War II, and through the years has continually worked with humanitarian causes.