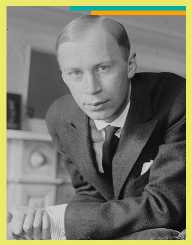 Sergei Prokofiev was born on April 23, 1891, in a part of Russia that is now instead of part of Ukraine. His parents were Maria Grigoryeva Zhitkova and Sergei Alekseevich Prokofiev. His mother was a pianist, who encouraged his musical talent from a young age.

It can be easily said that Sergei Prokofiev was a musical child prodigy. He started to write his own music before he knew how to write most anything else. He even wrote his first opera when he was nine years old. His talent only continued to grow from there. As a young teenager, he met the director of the Moscow Conservatory. Impressed by his skills, he earned professional lessons from Reinhold Gliere for two years.

was later able to attend the St. Petersburg Conservatory to continue his education. He studied at his school for ten years, from 1904 to 1914; although, he technically graduated from the school in 1909. It was while at the school that he made one of his first public appearances. He performed at the St. Petersburg Evenings of Contemporary Music.

While still in school, in 1911, it could be said that his professional music career officially began. In this year, he signed a contract with a music publisher, Jurgenson. His duties included in the contract had him touring in Moscow and giving performances.

In 1912, he wrote what would be known as his first major work: Piano Concerto N. 1 in D-flat Major. He performed this piece the same year it was written in Moscow. His performance was so wonderful that it inspired a sort of encore performance of the same song later on in the year.

In 1914, Sergei Prokofiev moved to England. There, he was commissioned to write a ballet. He moved back to Russia during World War I but continued to write. He completed the ballet in the next year and title it, Ala and Lolli. Throughout the rest of the 1910’s, Prokofiev worked on several compositions, including an opera, which was titled, The Gambler.

In 1918, Sergei Prokofiev moved to the United States to try to become more famous. His first opera written in the states (The Love for Three Oranges) was produced later in the same year. Even though his opera was a success, Prokofiev was still under financial strain. Unable to afford life in the United States he moved to France in 1920.

Once in France, Sergei Prokofiev settled in Paris. While in Paris he continued to write both symphonies and operas. However, before the decade was finished, he moved back to Russia. He did a tour several tours in and around Moscow in the last couple of years in the 1920’s.

In the 1930’s Sergei Prokofiev worked as a musical ambassador for Russia. He did several concerts in both Moscow and Paris, building his fame in both places. It wasn’t until the mid-1930’s that he settled in Moscow. While settled, Prokofiev was able to focus on his music. He wrote several of his most famous songs during the late 1930’s throughout the 1940’s. By the late 1940’s, he has amassed a great amount of fame, reaching the height of his career.

Just as he reached his peak, he was faced with a major challenge: the Russian government had banned some of his most famous works and were now looking unkindly on him. To try to appease the government, he wrote a song called The Story of a Real Man. Sadly for Prokofiev, the government officials who watched his show also hated it.

In the 1950’s, Sergei Prokofiev was beginning to face financial problems again, and his health was suffering. He wrote a few songs during this time, but his later works were not as famous as his older works.

Some of his most famous compositions are listed below.

In 1914, Sergei Prokofiev entered a music competition, called the Battle of the Pianos. He won the contest, earning his song, Piano Concerto N. 1 in D-flat Major, to be published. He also won the Anton Rubinstein Prize.

He won the People’s Artist of Russian Soviet Federative Socialist Republic (RSFSR) in 1947.

He was a member of the Order of the Red Banner of Labour.

After death, he was awarded the Lenin Prize.

Sergei Prokofiev married Carolina Codina in 1923. The couple later divorced. He remarried to Mira Mendelson in 1948, seven years after he and his first wife separated. He had two children with his first wife, Carolina: Oleg and Sviatoslav.

Sergei Prokofiev died on March 5, 1953. It is known that Sergei Prokofiev was ill at the time of death, but it is unclear what he was ill with. He was 61 years old when he passed away.