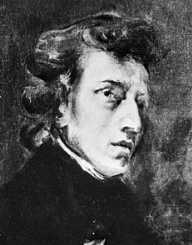 Polish composer and pianist Fryderyk Franciszek Chopin was born on the 1 March 1810 in The Mazovia region which was part of the Duchy of Warsaw. The house he was born in belonged to Count Skarbek in whose employ Chopin’s father was employed as a tutor. His father was a Frenchman Nicolas Chopin who settled in Poland brought his children up as Poles. Chopin’s mother was Tekla Justyna Krzyzanowska who was employed as Count Skarbek’s housekeeper. Chopin had three sisters: Ludwika, Izabela, and Emilia. When Chopin was a baby, his father took up a position as a lecturer at the Warsaw Lyceum and the family moved to Warsaw.

Chopin displayed musical ability and talent at a young age. By the time he was seven, Chopin had started composing and gaining attention with stories in Warsaw newspapers about his ability. He also began appearing at public concerts for charity.

Between 1816 and 1822 his piano tutor was Wojciech Zywny. He then studied with Wilhelm Wurfel, a professor at the Warsaw Conservatory. Chopin studied at the Warsaw Lyceum between 1823 and 1826. During his holidays he traveled to the homes of friends in the countryside and was exposed to folk music, dance and culture which had a lasting influence on him. In 1926 Chopin studied music at the Warsaw High School of Music and completed his course of study in 1829.

Once his musical education was completed Chopin traveled around Europe, and after giving to performances in Kärtnertortheater in Vienna, Chopin was recognized as a genius. When he returned home, he concentrated on composition, and he also gave public performances. Chopin was planning a trip to Berlin but changed his mind and decided to go to Vienna. After a farewell concert in Warsaw on the 11 October 1930 in the National Theatre, he left for Austria and later Italy. Chopin was in Vienna when the Russo-Polish war broke out, and Chopin spent eight months in Vienna where he continued composing. In 1831 he went to Paris, France. Chopin met up with exiled Poles fleeing the chaos in Poland and became a member of the Polish Literary Society. Chopin placed himself in self-imposed exile which meant that he could no longer return to Poland.

During his time in France, Chopin met Mendelssohn, Berlioz, Hiller, and Franchomme. In 1835 he met Schumann in Leipzig. Schumann was impressed with Chopin and championed his music. As his fame increased, Chopin’s music was published in both France and England.

As a young man, Chopin had fallen in love with Maria Wodzinski. She was the daughter of a family who had stayed at a boarding house managed by his father. Maria was musical and artistic, and the couple had a lot common. When he met with the family during his years in exile from Poland, he proposed marriage, but her family was concerned about his health and ability to provide for their daughter.

Then in 1937, Chopin met the French novelist George Sand(real name: Amantine-Lucile-Aurore Dupin), and they had a relationship. Sand was six years his senior and divorced with two children. They lived together in the late 1830s on the island of Majorca. Chopin fell ill with tuberculosis and was housebound, using the time to compose. The couple relocated to Nahant in 1839 where Sands owned a home, and they lived together until 1846. His health improved and his creative output increased. Eventually, the family conflict led to the breakdown of their relationship in 1847. He was heartbroken, and it affected his creativity. In April 1848 Chopin visited the UK where he gave a series of concerts but his health was failing, and his last show was on the 16 November 1848 in London, England.

Fryderyk Franciszek Chopin died in 1849 of tuberculosis in Paris, France.