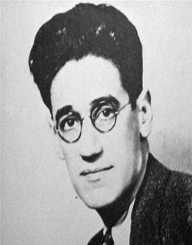 George Simon Kaufman was born on November 16, 1889. He was an American playwright, producer and theatre director. He was also a drama critic. He wrote comedies, musicals, and political satire. He died on June 2, 1961, at the age of seventy one.

George Simon Kaufman was born on November 16, 1889, in Pittsburgh in Pennsylvania, United States of America. He was born to Joseph Simon Kaufman and Nettie Meyers. He was brought up alongside his sisters, Ruth and Helen. In 1907, he graduated from high school and pursued law for only three months. He later started doing odd jobs to support himself.

George S. Kaufman started his career by contributing humorous material to the ‘New York Mail’ on a column that was written by Franklin P. Adams. In 1912, he became a humour columnist for ‘The Washington Times.' In 1915, he became a drama reporter for ‘The New York Tribune.’ He worked under Heywood Broun. In 1917, he was hired as a drama editor for the ‘New York Times,’ a post he held up to 1930.

In 1918, he made his Broadway debut with the play ‘Someone in the House’ which he wrote in collaboration with Walter Percival. His plays featured all through from 1921 to 1958. The only play that he wrote alone without any collaboration was ‘The Butter and Egg Man’ in 1925. The plays he wrote with other people include ‘Beggar on Horseback,’ ‘June Moon,’ ‘The Royal Family,’ ‘Dinner at Eight,’ ‘Stage Door’ and ‘The Solid Gold Cadillac’ among others.

In 1937, George S. Kaufman won the Pulitzer Prize. He played a significant role in contributing to the musicals ‘Animal Crackers’ and ‘The Cocoanuts.’ In 1932, he collaborated in the play ‘Of Thee I Sing’ which won a Pulitzer Prize. He later wrote the following musicals ‘First Lady’, ‘Hollywood Pinafore,’ ‘I’d Rather be Right,’ ‘Strike Up the Band,’ ‘Let ‘Em Eat Cake’ and ‘The Band Wagon’ among others.

George directed plays and musicals that included ‘Of Thee I Sing,’ ‘My Sister Eileen,’ ‘Of Mice and Men,’ ‘The Next Half Hour,’ ‘Park Avenue,’ ‘Town House’ and ‘Bravo’ among others. In 1951, he directed ‘Guys and Dolls’ which won him the 1951 Best Director Tony Award. He later owned the Lyceum Theatre in collaboration with Moss Hart and Max Gordon. Some of his plays that were adapted into films include ‘Dinner At Eight,’ ‘You Can’t Take It With You’ and ‘Stage Door’ among others. In 1947, he directed the film ‘The Senator was Indiscreet.’

In the 1940s, George S. Kaufman had an affair with actress Natalie Schafer. In 1944, he became a member of ‘The Lambs’ which was a well known theatre club. In 1917, he married his first wife, Beatrice who died in 1945. Together they had a daughter, Anne Kaufman. In 1949, he married his second wife actress Leueen MacGrath, but they divorced in 1957. He died on June 2, 1961, in New York at the age of seventy one.