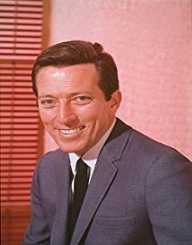 Howard Andrew Williams on December 3, 1927, in Wall Lake, Iowa, USA. He later began going by the name Andy Williams, which is the name he is best known for now.

Andy Williams’s music career began when he was only a child, in the late 1930’s. He was in a family quartet with his brothers: Bob, Dick, and Don. Together, the brothers sang on various radio shows throughout the 1930’s and 1940’s.

In 1960, Andy Williams released two more albums with Cadence Records (The Village of St. Bernadette and Under Paris Skies). In 1962, he switched recording companies and began working with Columbia Records. The first record he released with his new company was Danny Boy and Other Songs I Love to Sing.

His next album, Moon River, and Other Great Movie Themes was his first album to reach the RIAA Gold standard. Throughout the rest of the 1960’s, Andy Williams continued to release hit albums with Columbia Records. Many of his other albums also reached RIAA Silver, Gold, and even Platinum standards. Some of his most famous from this decade include The Wonderful World of Andy Williams, Andy Williams’ Dead Heart, The Shadow of Your Smile, Born Free, Honey, and Happy Heart.

Throughout the 1970’s, Andy Williams continued to work with Columbia Records. Unlike the previous decade, Williams did not create music throughout the whole decade, just until 1976. Again, his albums managed to reach Silver, Gold, and Platinum standards. Some of his most famous albums from this decade include Solitaire, The Way We Were, and You Lay So Easy on My Mind.

In the 1990’s, Andy Williams again only released three albums. His first two albums of the decade were released with Curb Records: Nashville and I Still Believe in Santa Claus. Another one of his albums, We Need a Little Christmas, was released with Unison Music. This album earned an RIAA Gold standard.

Williams’s most recent album and only album of the 2000’s was released in 2007 with the Demon Music Group. This album was titled I Don’t Remember Ever Growing Up.

Andy Williams began his acting career in the mid-1940’s. However, he was not credited for any of his roles during this time because he was on various shows as a singing entertainment act with his brothers. Some of the early shows he worked on with his brothers include Moonlight Melodies and Something in the Wind.

It was not until 1960 that Andy Williams returned to the screen. This time, he was working as an actor, not just a musician. His first on-screen appearance of the decade was in the made-for-television movie The Man in the Moon. For most of the rest of the decade, Williams worked on television shows as guest stars and in one movie (I’d Rather Be Rich). In 1969 Williams began starring in his own show, The Andy Williams Show.

In 1982 he also appeared in the Andy Williams’s Early New England Christmas. The last time he appeared on screen was in 1998 on The Larry Sanders Show.

Andy Williams married Claudine Longet in 1961. This couple had three children together: Christian, Noelle, and Robert Williams. However, this couple later divorced in 1969. He later married Debbie Haas in 1991. This couple was married until Williams’s death in 2012.

Andy Williams died on September 25, 2012. The cause of his death was complications due to bladder cancer. He was 84 years old when he passed away.