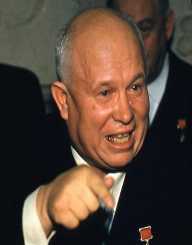 Russian leader and politician Nikita Sergeyevich Khrushchev was born on the 15 April 1894 in Kalinovka, Russia. His parents were Sergei and Ksenia Khrushchev and were Russian peasants of modest means. He had one sibling, a sister Irina. His mother worked as a teacher in their local village, and his father traveled around finding work in mining, the railroad, and other industries. Originally the family lived in the village of Kalinovka but later moved to the city of Donetsk where it was easier to find work in the industrial areas.

Nikita Khrushchev was educated locally and left school at the age of fifteen. Some reports claim he had only four formal years of schooling. After moving to Donetsk as a young man, did an apprenticeship and worked in a factory as well as on mine.

In 1918 Nikita Khrushchev joined the Communist Bolshevik Party. He fought in the Red Army during the Russian Revolution. He became a member of the Communist Party’s Central Committee in 1934, then the second secretary of the Moscow Regional Committee in 1933. He was elected to the Politburo in 1939. During this time he backed Stalin policies and was involved in political purges.

Nikita Khrushchev was a lieutenant general in the Soviet Army during World War II and a political adviser. In 1949 he returned to Moscow where he became head of the Moscow Regional Committee as well as being secretary of the Central Committee.

After Stalin had died in March 1953, Nikita Khrushchev became the first secretary of the party. At the same time, he was dealing with political foes he felt would threaten to destabilize his rise to the top job. Six months after Stalin’s death, the deputy prime minister and KGB chief was arrested and subsequently executed in December 1953.

In 1954 Nikita Khrushchev was involved in the Virgin Lands campaign which focused on agriculture. He was also involved in a jostle with Georgii Malenkov for the political supremacy. He consolidated his power in 1955 when Malenkov was ousted as chairman of the Council of Ministers.

Nikita Khrushchev denounced Stalin’s atrocities in a famous speech on the 24 February 1956. His political enemies attempted to oust him in 1957, but the Central Committee overturned their findings. He subsequently became premier of the Soviet of Ministers as well as party leader in 1958. He seemed keen to improve relations with the US and September 1959; he became the first Soviet leader to visit the United States.

The shooting down of a U-2 spy plane in 1960, resulted in relations between the two countries becoming strained. He visited the United Nations General Assembly in New York in October 1960, and this resulted in the shoe-pounding incident when he protested a speech given by the Philippine delegate

In June 1962 Nikita Khrushchev ordered the shooting of striking workers at Novocherkassk. The same year the Cuban missile crisis in October 1962 led to a flashpoint in US-Soviet relations. By 1963 the relationship Soviet-US had thawed, and a hotline was established between the two countries which led to the signing of the Nuclear test-ban treaty.

After being a leading political figure on the world stage during the Cold War Nikita Khrushchev was ousted by Leonid Brezhnev in October 1964.

Nikita Khrushchev married Yefrosinia Pisareva in 1914. They had two children together with a daughter Yulia (b.1915) and a son Leonid (b.1917). His second wife was Marusia, and he later had a long-term partnership with Nina Petrovna Kukharchuk whom he officially married in 1965. They had two daughters and a son: Rada (b.1929), Sergei (b.1935) and Elene (b.1937).

Nikita Khrushchev died on the 11 September 1971.