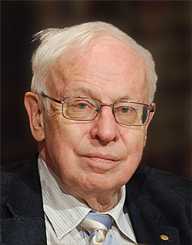 Edmond Henri Fischer was born on April 6th, in 1920. He was an eminent Swiss American biochemist. In 1992, he was bestowed with the Nobel Prize in physiology or medicine. This is an award he shared with Edwin G. Krebs, his collaborator. Together, the pair earned the award for their research into reversible protein phosphorylation.

At some point in his career, Fischer served as the World Cultural Council’s president. This was a post he held from 2007 to 2014.

Fischer’s grandfather was a celebrated individual for having established the "Courrier de Chine.” This was the first paper in China to be published in French. Aside from this, he was credited with establishing the "l'Ecole Municipale Française."

When Fischer was aged 7, he was sent to La Châtaigneraie, a Swiss boarding school. Shortly after this, he went to high school where he also had visions of becoming a famous musician. This had influenced his decision to join Geneva Conservatory of Music.

After completing his high school education, Edmond H. Fischer initially wanted to pursue microbiology. Nonetheless, he was later tipped that chemistry was a better alternative. He enrolled in his classes at the University of Geneva. Years later, he earned his Ph.D. in organic chemistry. Fischer had been under the tutelage of Kurt Heinrich Meyer.

Edmond H. Fischer took some time studying with Kurt Heinrich Meyer on polysaccharides. After this, he moved to the United States where he could advance his postdoctoral research. Here, was offered a job at the University of Washington, Seattle. Six months later, he partnered with Edwin G. Krebs and initiated their investigation on glycogen phosphorylase. This led to their famous discovery of reversible protein phosphorylation.

As a result of their discovery which was considered as quite essential in biochemistry, Fischer and Krebs were bestowed with a Nobel Prize in 1992. The Swiss Chemical Society also awarded Fischer with the Werner Prize. In addition to this, he also bagged home the Prix Jaubert, an award he was given by the University of Geneva.

Soon after, Edmond H. Fischer was recognized as a Fellow of the American Academy of Arts and Sciences in 1972. The following year, he joined the National Academy of Sciences as one its members.

Edmond H. Fischer wedded Nelly Gagnaux in 1948. He had met her when he was employed at the University of Geneva. Together, they were blessed with two sons named François Fischer and Henri Fischer. Sadly, his wife Nelly passed away in 1961.

Two years later, he tied the knot with Beverley Bullock. From this relationship, he welcomed a stepdaughter named Paula Bullock in the family. Beverley had given birth to this child in her former connection.