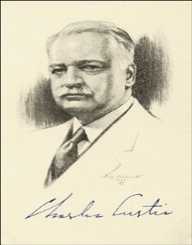 Charles Curtis was the 31st Vice President of the United States of America, serving a term from 1929 to 1933 with President Herbert Hoover. He was the first native American to serve in office.

Charles Curtis was born on 25th January 1860 on Kansa/ Kaw Indian Territory before it was known as Topeka, Kansas Territory. His father was Orren Curtis was of English descent, while his mother Ellen Papin (or Pappan) was a descendant of Kaw, Osage, Potawatomi Native American Indian descent, and French. At home, Charles Curtis spoke French and Kansa, taught by his mother before her death due to cholera in 1863. He had a sister Elizabeth who was born in 1861. His father Orren remarried twice, giving him a half- sister Theresa Permelia "Dolly" Curtis in 1866. After the death of his mother Ellen, Charles lived with both his maternal and paternal grandparents, while his father fought in the Civil War. When he lived with his maternal grandparents in 1868, Charles Curtis ran sixty miles from Kaw reservation to Topeka to seek aid when the Cheyenne Indians invaded.

Charles Curtis earned the nickname Indian Charley and promoted William and Permelia Curtis, his paternal grandparents to request his return to Topeka. In North Topeka, Charles Curtis gained infamy as a full-fledged jockey from 1869 to 1876, knowns as The Indian Boy. His grandfather William helped him inherit his mother’s share of Half- Breed Lands in North Topeka, which was contested by his father. As Kaw was a matrilineal system, Orren lost the suit and left Topeka. Upon advice from his grandmother Julie, Charles Curtis went to live with his grandmother Permelia Hubbard Curtis and half-sister Dolly, as grandfather William had passed away in 1873.

Charles Curtis graduated from Topeka High School, encouraged by his grandparents. Despite having inheritance, he worked as a custodian and drove a hack while studying law with A. H. Case in 1879. He was admitted to the Kansas Bar in 1881, at the age of twenty-one.

Charles Curtis opened his firm to practice criminal law and sold real estate to add to his income. Charles was elected as Shawnee county’s prosecuting attorney in 1884, from 1885 to 1889, he enforced many laws, including the state’s liquor prohibition laws. Charles was elected as a Republican to the House of Representative of the fifty-third congress on 4th of March 1893. He served for six consecutive terms, resigning on January 1907 on his appointment in the Senate. As a Representative, Charles Curtis was devoted to Indian affairs, including the Curtis Act of 1898. Charles Curtis also promoted assimilation and education of Indian tribes and encouraged Indians to accept individual citizenship and lands to adopt European- American culture. He re-enrolled in the Kaw Nation, but disbanded the nation as a legal entity with Kaw Allotment Act in 1902, but allotted the members land in Oklahoma.

Following the resignation of Joseph R. Burton on June 4, 1906. Charles Curtis moved to the Senate to replace him, resigning from the House of Representative. He was re-elected to the full Senate term the next year, where he served until 1912. Following the loss to the Democrats, the Republicans appointed Charles Curtis to be the Republican whip, serving under New Hampshire Senator first, and then Massachusetts Senator. Charles was part of the team who granted women’s right to vote.

In 1928, after Herbert Hoover won the vote to run for the presidency, Charles Curtis was picked as a running mate, to win elections from farm states. He agreed to run out of loyalty, and the Republicans won the 1929 term. Due to their disagreement, Charles was not consulted for advice during Hoover’s presidency. After the pair failed to stop the Great Depression, they were not nominated for a second term. Charles retired from politics in 1933 but remained in Washington, D.C for his legal career.

Charles Curtis married Annie Elizabeth Baird on 27th November 27, 1884, the year he was elected prosecuting attorney. The couple had two daughters and a son, before Annie’s death in 1924. Following the death of-of his grandparents, half-sister Dolly lived with the family before her marriage. Charles was the only politician who was not married during his term in Senate, and he had Dolly act as his official hostess. Charles Curtis died of a heart attack on 8 February 1936, in his sister’s home in Washington D. C.

Charles Curtis was flown back to Kansas, and buried in Topeka Cemetery, next to his wife.