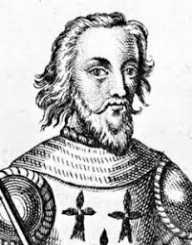 Charles of Blois Chatillon was born around 1319 in Blois, France. He was the son of Guy de Châtillon, count of Blois and Margaret of Valois, Countess of Blois. Margaret was the sister of King Philip VI of France.

An exceptionally god-fearing person, Charles of Blois used to place himself under severe physical torture to show his spiritual devotion. From a very young age, he was known for his righteousness and bravery. He later became an accomplished military leader and inspired the soldiers under him to embrace loyalty and sanctity.

Charles of Blois, in his early days, was a man possessed by religious fervor. He used different methods to put himself under severe discomfort. Charles continuously inflicted pain upon himself by resorting to torturous measures like placing pebbles in

his shoes, tying his flesh with tightly knotted ropes, sleeping on straw, etc. He also confessed his sins every night during bedtime to be able to sleep peacefully. The reason behind these entire self-afflictions was to express his utterly devout state of mind.


Marriage And The Initiation of The Breton War of Succession

Charles of Blois married Joanna of Penthièvre on June 4, 1337. Joanna was the niece and heiress of Duke of Brittany, John III. The contemporary political circle saw this marriage as a mutual collaboration to strengthen the political and military might of Charles and Joanna and their immediate family. Duke John III died in 1341. After his death, Charles staked his claim to become the Duke of Brittany.

However, his uncle John de Montfort rejected his claim. Initially, Charles tried to resolve the issue with his uncle through peaceful negotiations. The inflexible and adamant attitude of Montfort led to the failure of such peace talks. Thus began the 20-year-long Breton War of Succession (1341-1364).

The Breton War of Succession And The Aftermath

During the initial days of the Breton War of Succession, Charles of Blois succeeded in thwarting the attacks made upon him. He received the support of the crown of France in his rightful claim to the Dukedom. On the other hand, Montfort could garner the support and assistance of Edward III. Charles snatched the control of the city of Nantes and incarcerated Montfort for four years as a measure of his initial success.

Montfort’s aid Edward III attacked Nantes to free him from the control of Charles. However, a timely intervention by Pope Clement VI prevented Edward III from going any further through a negotiated truce.

Both Charles and John de Montfort resumed their rivalry soon afterward disregarding the terms of the truce. In an utterly inhuman and barbaric act, Charles ordered slaughtering of around 2000 civilians after the siege of Quimper.

Charles of Blois could not continue his winning run for long. In January 1347, he was captured at La Roche-Derrien and was imprisoned in the Tower of London.

Upon his incarceration, Charles of Blois spent nine years in prison. He paid a ransom of half a million écus in 1356 for his release. He also agreed to place his Dukedom under the subordination of Edward as a precondition for his release. On July 12, 1363, Charles decided with Duke John IV of Brittany agreeing to part with some portion of Brittany to the latter. However, on the insistence of his wife Joanna, Charles broke the pact and resumed the war again.

Consequent to this development on September 29, 1364, Charles of Blois was killed. His army also faced defeat at the Battle of Auray. Thus, the Breton War of Succession concluded with Charles' death. After that, the Montfort's formally gained the title of the Duke of Brittany.