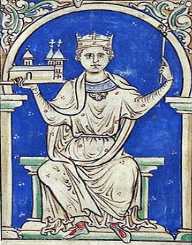 Stephen or Stephen of Blois, as he is referred to popularly, was born either in 1092 or in 1096. County of Blois in central France was his place of birth. Stephen was the third son of Count Stephen II Henry, Count of Blois and Chartres. His mother’s name was Adele, daughter of King William I. Stephen II Henry died while Stephen of Blois was in his early childhood days. His uncle, Henry I of England took Stephen under his wings and brought him up with the help of Stephen’s mother Adele.

During his early boyhood days, Stephen successfully used the court of his uncle to consolidate his position and rose through the ranks. He received a vast stretch of land including the county of Mortain and Normandy, the county of his mother when he was only 18. A few years later he married his cousin Matilda and acquired further estates in the form of the County of Kent and Boulogne.


ACCESSION TO THE THRONE

In 1120, Stephen narrowly escaped the sinking of the White Ship off the coast of Normandy. Stephen survived the shipwreck but his uncle's son William Adelin died in the mishap.

William’s death left the England throne without a proper successor and became vulnerable to challenge. King Henry I of England died in 1135. Sensing the opportunity, Stephen reached England crossing the English Channel in no time. Using the help of his brother Henry of Blois, he accessed the English throne successfully. On December 26, 1135, Stephen's coronation ceremony took place where Stephen succeeded his uncle to the English throne. His wife Matilda was also the daughter of King Henry I. On account of her marriage with Stephen, she became the queen the next year.

During the early years of Stephen’s rule, he successfully defended his empire in England and Normandy. A series of attacks was made onto his possessions during this time. The attacking groups were David I of Scotland, some rebellious groups of Welsh and Geoffrey of Anjou. Stephen controlled all these aggressions and disturbances with iron hand including a rebellion by his wife’s half-brother Robert of Gloucester. With a threat of a civil war looming large on his kingdom, he took a firm and decisive move to secure his regime. He arrested an influential family of a cleric in order to safeguard his rule. However, on the face of a coordinated attack in 1139 by his wife Matilda and her brother Robert, he could not rein in and had to surrender a substantial area in the south-west of England.

Robert seized him during the battle of Lincoln in 1141. As a result, many of his followers deserted him. He also lost control over the land of Normandy. One of his military commanders apprehended Robert at the rout of Winchester. Stephen was freed following the capture of Robert. However, the war continued for a few more years but neither party could secure an edge over the other. Finally, in the year 1148, Empress Matilda withdrew her forces and retreated back to her place. With this development, the long drawn war came to an end. The period of this conflict is historically known as ‘The Anarchy’.

FURTHER TURMOIL & THE TREATY OF WALLINGFORD

Stephen was very keen to allow his son Eustace to inherit his throne. He tried to persuade the Church to give their consent in this regard. However, Pope Eugene III denied acceding to his request. This resulted in some bitter negotiations between him and the clergymen. In 1153, Henry FitzEmpress, son of Empress Matilda, attacked Stephen and his kingdom. FitzEmpress also made an alliance with the influential local lords to stake his claim on the English throne. Realizing the gravity of the situation, Stephen preferred to sit on a negotiating table. The peace process was expedited after the unexpected sudden death of his eldest son Eustace.

Both sides met at Wallingford and both Stephen and Henry came to an agreement. The agreement was arrived at during late 1153 and is historically known as the Treaty of Wallingford/Treaty of Winchester. According to this agreement, Stephen accepted the claim of Henry as his heir apparent who will succeed Stephen negating the claim of Stephen’s second son William. This agreement finally ended the war after a prolonged turmoil of fifteen years. The agreement enabled Stephen to hold on to his throne until his death. He died on October 25, 1154, after falling sick with a stomach disorder while preparing to negotiate with the Count of Flanders at Dover.