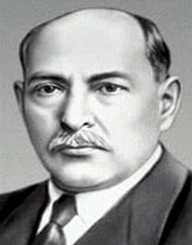 Nariman Karbalayi Najaf oglu Narimanov was born on April 14, 1870, in Tbilisi, Georgia, at the time part of the Russian empire. His family was middle-class merchants. He attended the Gori Teachers Seminary and later went to Odessa University to study medicine. Narimanov graduated from university in 1908.

He began writing while still at university and gained notice in Azerbaijan. He published several novels advocating the abandonment of tired customs and religious superstitions. Narimanov first became acquainted with the hardships of local peasants when he was working at the Gizel-Adjal school in Tiflis Province, where he worked as a teacher. He became one of the first activists for the young Turkic literature and translated Gogol’s Inspector into Turkic. He wrote many plays, stories, and novels, like Bahadur and Sona in 1896 and Nadir-Shah in 1899.

In 1905, during the Revolution, Nariman Narimanov joined the Bolshevik party. He became the leader of the student movement in Odessa. He became one of the organizers of the socialist democratic party Isheyun-Asheyun in Persia. For his activities, he was arrested and sentenced to five years in exile in Astrakhan. In 1917, in the aftermath of October Revolution, Narimanov rose up once again is his political career. He became the chairman of the Azerbaijani social democratic party Hummet. He was also the forerunner of the Communist Party of Azerbaijan.

He was also briefly the reign of the Baku Commune in 1918. When Baku Soviet fell, Nariman Narimanov escaped to Astrakhan and avoided his death. He was then appointed the chief of the Near East Division of the People/s Commissariat of Foreign Affairs of Soviet Russia. He later became the Deputy People’s Commissariat in the Commissariat of National Affairs. He advocated national autonomy within a federated Soviet structure and was instrumental in recognizing Azerbaijan as the independent Soviet Republic.

In 1923, Nariman Narimanov became a candidate for membership in the Central Committee of Russian Communist Party of Bolsheviks. He then entered a conflict with Stalin’s close associate Sergo Ordzhonikidze and transferred to post in Moscow, removing him from the political scene of Caucasus region.

Nariman Narimanov died on March 19, 1925, after suffering a heart attack. During the 1930s, he was denounced along with other members of Hummet for their nationalism. However, after Stalin’s death, Narimanov was again celebrated as one of the leading figures in Azerbaijani communism.