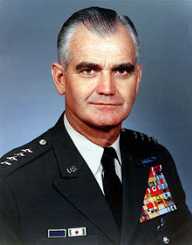 During his high school days, he achieved the highest rank of an Eagle Scout in the Boy Scouting Program of the Boy Scouts of America (BSA). He also received the Distinguished Eagle Scout Award and Silver Buffalo from the BSA before his high school graduation. He attended the military college of South Carolina referred to as ‘The Citadel’ by the common people in 1932.

He enrolled at the elite United States Military Academy at West Point, New York, after getting recommended by Senator James F. Byrnes, a well-wisher of his family. He earned his graduation from the Academy in 1936 securing the highest cadet rank of first captain and receiving the Perishing Sword, symbolically awarded to a cadet graduating with the highest level of military expertise.

Upon his graduation from West Point, he was assigned the duty of an artillery officer and was posted at the 18th Field Artillery at Fort Sill, Oklahoma, with the designation of Second Lieutenant. In 1939, he was promoted to the position of First Lieutenant after having successfully served several assignments with his Field Artillery. He was promoted further and was commissioned as a battery commander and battalion staff officer with the 8th Field Artillery at Schofield Barracks, Hawaii. He continued to serve in different field artillery assignments and was transferred to the 9th Infantry Division at Fort Bragg, North Carolina. He fought the entire World War II as a dedicated and highly decorated soldier of the 9th Infantry Division.

He traveled abroad to participate in the combat operations of World War II in 1942. He led the 34th Field Artillery Battalion of the 9th Infantry Division as Lieutenant Colonel and oversaw the combat operations in Tunisia in North Africa. He moved along with his battalion to Sicily, Italy and supported the 82nd Airborne Division. His battalion then reached Normandy in England. He rose up to the ranks further and was promoted to the temporary wartime rank of Colonel. On October 13, 1944, he was elevated to the post of the Chief of Staff of his 9th Infantry Division.

After the conclusion of the World War II, Westmoreland undertook airborne training at the infantry school in 1946. He was given the charge of the 504th Parachute Infantry regiment immediately afterward. He was appointed as the Chief of Staff of the 82nd Airborne Division and served the post from 1947 to 1950. He worked as an instructor at the Army Command and General Staff College from 1950 to 1951 and stayed there to complete his extended tenure as an instructor until 1952.

Korean War broke out in the mid-1950s. Westmoreland was sent to Japan in 1952 as the commander of the 187th Airborne Regimental Combat Team, to be stationed there and to oversee the periodical deployment of his troops to Korea according to the exigencies of the situation. He was again promoted as the Brigadier General in November 1952. Upon his return from the Korean War in 1953, he was assigned to the Pentagon. He held several important portfolios there including Deputy Assistant Chief of Staff, G-1, Manpower control on the Army Staff (1953-1955) and US Army’s Secretary of the General Staff (1955-58).

In 1954, he attended a three-month management program at Harvard Business School. In December 1956, he was elevated to the post of Major General. At 42 years, Westmoreland became the youngest person to have attained such rank in the United States military history. From 1958 to 1960, he commandeered the 101st Airborne Division and was made the Superintendent of the United States Military Academy, West Point, New York for the period from 1960 to 1963. In 1963, he was sent to Vietnam to work with the U.S. Military Advisers who were helping the United States forces to back the South Vietnamese government in their war against the socialist North Vietnamese.

He was promoted to the highest military rank of Army Chief of Staff in 1968. However, his involvement and handling of the Vietnamese war though initially praised, came in for a bitter and sharp criticism, particularly when under his watch the U.S. troop strength in Vietnam increased from a mere 16000 to a mind-boggling 5,35,000.

Westmoreland married Katherine (Kitsy) Stevens Van Deusen in May 1947. They together had three children. He breathed his last on July 18, 2005, at his Bishop Gadsden retirement home in Charleston, South Carolina. His mortal remains were entombed at the West Point Cemetery, United States Military Academy on July 23, 1995.