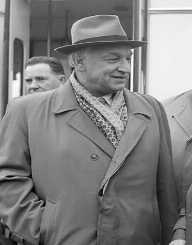 Algirdas Brazauskas was born on September 22nd, 1932. He is famous for he was the first president to serve in office for post-soviet Lithuania. He served the post as the president from 1993 and ended his tenure in 1998. Later, he was the Prime Minister beginning 2001 and ending his term in 2006.

Born on September 22nd, 1932 in Rokiskis, Lithuania, Algirdas Brazauskas rose to become a phenomenal figure in his nation. He was born to parents who were inclined to politics. His mother worked as judge while his father worked in different jobs including as an accountant, civil servant, and a schoolmaster. For his early high school education, Brazauskas schooled at Kaišiadorys High School. This was in 1952 before moving on to graduate from Kaunas Polytechnic institute four years later. He earned himself his civil engineering degree from the institute.

During the 80s, when the Soviet Union was going through major changes, Brazauskas ventured into politics. Earlier on, he was a communist, but he later changed and simply became a reformer. His political views were against any form of utopian ideas. As a result, he acknowledged the fact that the Communist Party had a soiled history behind it.
Since the beginning of 1965, Brazauskas served in different Lithuanian SSR government positions including serving as the minister for construction materials in the period 1965 to 1967. He also served on the State Planning Committee as its chair from 1967 to 1977. After this, he went to serve for the Communist Party as the Central Committee’s secretary. He served for about a decade from 1977 to 1987.

A year later, Algirdas Brazauskas was appointed as the Communist Party’s first secretary. His run in the office brought a wave of seeking for Lithuania independence. After that, his party also strived to break away from the Communist Party that was under the Soviets. This later converted the party into Democratic Labour Party of Lithuania.
During the 1992 presidential elections, Brazauskas emerged as the winner swooping 60% of the total votes. He was sworn into office the following year on February 25th. He served this for one term which ended on February 25th, 1998. After this, he did not run for office and opted to retire from politics. ValdasAdamkus took over as the next president after him.

Soon, Brazauskas was back in politics in 2001 where he was appointed by the parliament to serve as the Prime Minister. He served for five years.

Algirdas Brazauskas got married twice. His first marriage was to Julija Brazauskien?. The pair got two daughters before divorcing each other. Later on, in 2002, he tied the knot to Kristina Brazauskien?.

Algirdas Brazauskas’s health deteriorated during the late stages of his life. In the late 2000s, it was detected that he had lymphatic cancer. This contributed to his death at the age of 77 on June 26th, 2010.