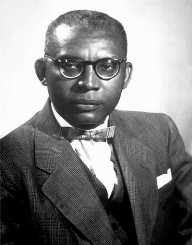 Francois Duvalier was born 14th April 1907, to Duval Duvalier and Ulyssia Abraham. He was born in Port-au-Prince, in Haiti. Duvalier's aunt raised him during his childhood. In 1934, Duvalier graduated from the University of Haiti with a medical degree.

He worked in local hospitals as a staff doctor, before enrolling at the University of Michigan. He studied public health, and, as a result, Duvalier took part in a campaign sponsored by the U.S. government.

The campaign worked on controlling contagious tropical diseases such as malaria and typhus. The illnesses had all caused adverse effects in Haiti for many years. During this period, Duvalier became known as "Papa Doc."

In 1946, Duvalier joined the staff of President Estime. He became Director General of the National Public Health Service.He then progressed to the position of Minister of Health and Labor in 1949.

In 1950, Paul Magloire took over the Presidency by forcing a coup. Duvalier left the government and returned to working as a doctor. He left his medical practice in 1954 to go and hide in the country from the government.

Two years later, with the Magloire regime failing, Duvalier announced he would run for the Presidency in 1957. Magloire admitted defeat in 1957 and stepped down. Duvalier became President in September of the same year. Accusations of voter fraud and intimidation surfaced soon after.

When he became President, Duvalier exiled the main supporters of his opponent during the election.

Duvalier moved blacks into most of the positions in the military and civil service. After a failed coup in 1958, he replaced his chief-of-staff with a man he thought more trustworthy. The following year, he established a militia to maintain control in the country areas. Wealthy mulattoes had ruled Haiti, but Duvalier gradually got rid of them all, and his power grew as a dictator.

In 1959, Duvalier had a heart attack. During his recovery, he gave control to Clement Barbot. When he returned, Duvalier sent Barbot to prison. He thought Barbot was trying to take over as President. Barbot attempted to kidnap Duvalier's children after he left prison, but the government captured and killed Barbot. This was due to his plan failing.

Duvalier then held a presidential election where he was the only candidate. The media reported that the campaign was clearly rigged, but he went ahead and won. In 1964, he held a referendum which voted in favor of making him a President for life. Duvalier rigged the poll, and as a result, it gave him total control. He also had the power to name his successor.

Duvalier stole millions of dollars in international aid. The U.S. paid $15 million every year which he took. President Kennedy dealt harshly with Duvalier, but after his assassination, this changed. Although it had been close, Haiti's relationship with Cuba disintegrated when Fidel Castro took over. Castro supported anti-Duvalier dissidents. Due to other political activities, Cuba and Haiti broke ties in 1959. They didn't establish the relationship again until 1997.

Duvalier ran a very oppressive government. He murdered or exiled his opponents. Estimates of those killed runs into the tens of thousands. He also hunted communists and those suspected of being communists. Haiti outlawed communism in 1969.The government took land from the peasants and then gave it to the militia members. The militia made their money by crime and extortion, not through proper work.

Many educated professionals, such as doctors and teachers, left the country. Despite this, Duvalier stayed popular with the black vote, which was the majority of the population.

Duvalier married Simone in 1939. They had four children, and Jean-Claude Duvalier succeeded his father as President. Duvalier died in April 1971. Cause of death was heart disease and diabetes