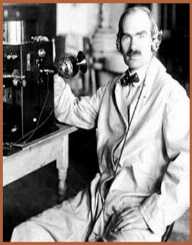 As a child, Lee De Forest loved science and machinery. He always wanted to invent something. However, his father was a priest and hoped that his son would take up the same career. However, Lee De Forest was not convinced that it was the right choice for him, though. Instead, he studied at a couple of different scientific schools, including Mount Hermon School and Shefford Scientific School at Yale University. He later graduated from the former school in 1893 and the latter school in 1896, which earned him a bachelor’s degree. He then continued his education for several more years before earning his Ph. D. in 1899.

After finishing his education, Lee De Forest began working at the Western Electric Company. Here, he worked mostly with telephones. During his free time, he also experimented, trying to make his own inventions. He worked most towards developing radio equipment.

In 1902 he left the Western Electric Company to make his own Business, which he called the Lee De Forest Wireless Telegraph Company. Here, he produced the radio equipment he had developed while working at his previous job. Although his ideas were great, his business partner wasn't, and so the company dissolved in 1906.

In 1906, Lee De Forest invented a device that worked almost like a modern-day amplifier, making certain sounds louder. At the time, Lee De Forest did not know how valuable this invention would become. Two years later, he invented a detector for his previous device. The two would work together. It was patented in 1908.

In 1909, Lee De Forest started up a new company which he called the Lee De Forest Radio Telephone Company. Again, he had picked up some shady business partners, who were making his company fail.

In 1916, Lee De Forest began advertising his products on a type over the radio. The radio station was new and experimental. No one really knew how it would go. Luckily for Lee De Forest, it was a success.

The Phonofilm was a hit. In the short years following its invention, it was being used in Hollywood films. Without this, films would have remained silent for much longer. As televisions were invented, this device was used in them as well.

Even though his inventions were great, they did not sell well during De Forest’s lifetime. Because of this, he lived and died as a relatively poor man.

All of De Forest’s awards and accomplishments are for his inventions. Some of his most prestigious awards are listed below.

He earned a star on the walk of fame in 1960 for his inventions that allowed sound in movies.

Lee De Forest was first married in 1906 to Lucille Sheardown. However, the couple divorced later in the same year. He remarried in the next year to Nora Stanton Barney. This couple had one child together. They later divorced in 1911. He remarried the next year to Mary Mayo. This couple also had one child together. However, they too divorced in 1930. He was married for the last time later in the same year. The marriage only ended with De Forest’s death.