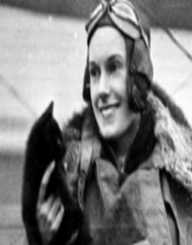 Daughter of the Skies and record-breaking damsel, Jean Batten saw herself as a successful aviatrix. Alone in the sky, she flew high. If you think that she got a four to a five-year college degree in the field of aviation, then you are wrong. Having a flight instructor was something that was out of her league. With a steady pace, she remarkably rose to fame for smashing the routes of Australian and England. In fact, she became the first woman to fly from Australia to England in two weeks’ time. That’s how incredible she was.

Jean Batten's next world record was when she traveled from England to Argentina and from England to Brazil. There is no doubt that her dearest mother saw her talent right from the start. This is what paved the way for more awards and recognition. She was appointed as the Commander of the British Empire. Aside from receiving countable of awards, Jean’s autobiography called My Life was published in 1938.

On 15th, September 1909 a duo, Ellen Batten and Frederick Batten were blessed with their only child, a daughter in Rotorua, New Zealand. She was none other than Jean Gardner Batten whose father served as a dental surgeon. At five years old, her family moved to Auckland where Jean joined Melmerley Ladies School in Parnell. Though she came from a decent family, Jean’s father greased his elbows without making a fuss.

Her parents parted ways in 1920 where Jean Batten opted to stay with her mother. The two developed a close relationship that gave birth to new establishments. Her mother Ellen encouraged her daughter to follow her field of aviation. Afterward, Jean along with her mother traveled to Howick, New Zealand.

After a short pause of settling down, Elena took her daughter to a convent school. Jean Batten later joined a boarding school with the help of his father’s aid. While there, she learned several skills such as ballet dancing and piano lessons.

In the mid of 1920s, Jean Batten's career changed from dancing to flying. During the 19th-century the world of aviation concentrated more on record-breaking flights and record settings. As a beginner, several aviators inspired her on the way including Charles Lindbergh who made a solo flight by crossing the Atlantic Ocean. Aside from that, her mother supported her to the core.

Subsequently, Elena took a leap of faith where he took her daughter to Sydney on a short vacation in 1929. She also took the time to talk with Charles Kingsford Smith. In the process, Jean and Charles met. Early in the 1930s, her mother took her to London Aeroplane Club.

By the end of 1932, Jean Batten had her commercial and private licenses, all thanks to pilot Fred Truman. She also studied mechanics and aircraft maintenance. After borrowing money from her close friend, Fred she formed a close relationship with Victor Doreen. In the process, she also acquired a lump sum of dollars. According to sources, it was believed that Jean took advantage of her relationship by raising money with the aim of furthering her career.

Following his approval to fly up so high, Jean Batten first started with failures in between her career. The birds showed her unsatisfactory results, but she didn’t show any signs of giving up. She took flying like a penguin that loves water to the core. It was her bread and butter. Most people defined her as a slow learner; little did they know something was cooking inside her thoughts.

After the first attempt, Jean tried her best at her second trial. This time she was forced to make a sudden landing due to fuel shortage. She took the time to repair the craft where she landed in London with less effort. Her fiancé, Edward Walter helped her with aircraft wings that were lighter and easy to control. With that, she was more than ready to make a third trial.

On 8th, May 1934 Jean Batten was glad to have completed the first solo flight thus from England to Australia. She finished her trip in two weeks, 22 hours and 30 minutes. It was also the same years that Jackson and O’Sullivan Limited published her memoir called Solo Flight.

Subsequently, Jean Batten bought a modern aircraft titled G-ADPR. The following years she ruled the field of aviation by holding as the first woman to compete in a return flight from Australia to England. She also managed to take up a solo flight from England to South America. Her new record was her first solo flight from England to Brazil that she completed in 60 hours and 15 minutes. The destination garnered an Order of the Southern Cross. She became the first person to receive such recognition.

Jean Batten's next success included that of 1935s where she made plans to cross South Atlantic Ocean in 14 hours and 15 minutes. Her records spread where she topped the world of fame again with her flight from England to New Zealand. This time around she took 11 days and 45 minutes.

After all the fun and adventurism, the beginning of WWII ended Jean’s career. Though her aircraft was still used to maneuver different places, she wasn’t given a chance to fly. To make a busy schedule, she joined different companies where she raised awareness of her field as well as increasing funds. With old age knocking on her door, Jean Batten opted to live a private life away from the media and public eye.

For the rest of her next life, Jean Batten chose to live as an introvert and a recluse. She tried to hide by staying at different places with her dearest mother. Unfortunately, her mother called it quit the world in 1965 in Spain. When it comes to her personal life, there is no chance that Jean managed to have a person to call as a spouse. It is said that she was linked with a wide array of romantic relations.

Early in 1982 when Jean Gardner Batten was living alone in Spain, Majorca, a feathery strip dog bit her leg. As a result, she was left with immense pain and sizable wound due to infection. Due to lack of adequate care and treatment, she breathed her last on 22nd November 1982. She was interred at Majorca Island on 22nd, January 1983. Unfortunately, the world and beyond came to know about Jean’s death when Ian Mackersey tried to look for her whereabouts.