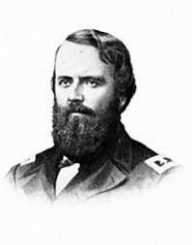 John Pope was born to Nathaniel Pope in Louisville, Kentucky on March 16, 1822. His father was a judge of the US Federal court. He grew up in a wealthy family with his father being a personal friend of the lawyer and future US President Abraham Lincoln. After his primary education, he joined the US military. In 1842, he completed his military training at the US Military Academy.

He earned the title Second Lieutenant and was deployed to the Topographical Engineers unit. He served in other stations before being sent to the US border with Canada.

John Pope's surveying assignment was cut short by the American war with Mexico in 1846. Pope distinguished himself as a brilliant officer in battle. He commanded his troops while under General Zachary Taylor in two successful military campaigns. His troops triumphed over the Mexican army in the Battles of Monterrey and Buena. His brilliance and diligence in battle earned him a promotion. He became the first lieutenant then captain of the military.

When the war ended in 1848, Pope worked in other civilian assignments. In 1850, he helped in the surveying of the Red River in Minnesota. In 1851 he moved to head the engineering team of the Department of New Mexico. Pope stayed on the assignment until 1853. He was deployed to survey and oversee the construction of the Pacific Railroad by the US government.

John Pope served as the presidential aide to the newly elected President Abraham Lincoln. When the war erupted between the Union and the Confederates in 1861, President Lincoln promoted him to brigadier general of the US army volunteers. On June 14, 1861, Pope was officially mandated to recruit volunteers in the state of Illinois and its adjacent regions into the US army.

He began his military campaign in Western Department. He took command of the army units in defending the Missouri region. He led successful campaigns in Missouri with victories in the Battle of Blackwater River. In 1862, Pope was given the command of the army in Mississippi. On March 14, 1862, he defeated the advancing Confederate army in the battle in New Madrid.

John Pope went ahead to capture another vital point, the Island No. 10 on the Mississippi River. His heroics brought him a promotion from his seniors. Pope moved to the rank of major general of the volunteers. His promotion earned him a sworn enemy in another US army commander, Major General John Fremont.

President Lincoln appointed Pope to head the US army in Virginia. This meant he commanded units formerly under Major General Fremont. General Fremont was relieved of his command and put under General Pope, his former junior officer. Refusing to obey the orders, President Lincoln discharged Fremont from the army. Pope galvanized the demoralized US army units in Shenandoah Valley and Northern Virginia. He received reinforcement from General McClellan, head of the US army.

In the ensuing battle, the Confederates defeated the US army under General Nathaniel Banks. General Jackson cut off the supply route of essential military support to the US army in Manassas Station.

General Lee launched his final assault on the US army in the Battle of Bull Run. Pope and his army were defeated by General Lee and retreated. He blamed his subordinate officer General Fitz Porter for disobeying straight orders leading to the defeat.

General Porter was court-martialled and dishonored from the army. In September 1862, President Lincoln transferred Pope from his command to Minnesota. He was assigned to appease an American Sioux Indian revolt in the tribal land. Pope secured decisive victories in the Indian campaign.

John Pope served as the governor of the Third Military District after the civil war from April 1867. He issued a series of unpopular decrees until his removal by the US President Andrew Johnson in December 1867. He became the Department of the Lakes commander in Detroit from January 1868 to April 1870.

When President Grant took office, Pope was transferred to the west of the USA. He became the commander of the Department of Missouri. He spent the rest of his military career fighting the Native Indians in the western frontiers. On October 26, 1882, President Rutherford Hayes integrated him into the regular army with full major general honors. He continued fighting and protecting the settlers in the western frontiers until his retirement on March 16, 1886.

General John Pope died at the Ohio Soldiers’ Home on September 23, 1892. He was buried in St. Louis in Missouri.

A career military officer, General Pope, fought and achieved decisive battleground victories in the civil war and the western frontier. Despite his defeat by the Confederates in Virginia, Pope had an illustrious career. He remains the only General to be assimilated into the regular army from the volunteers' corps in the history of the US.