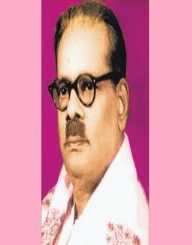 Bharathidasan was born on April 29, 1891. He was a Tamil poet and rationalist. He works handled social-political issues that were arising internationally. His works led to the development of the Dravidian movement in Tamil Nadu. His works extended to film scripts, essays, plays and short stories.

Bharathidasan was born on April 29, 1891, in Pondicherry, French India as Kanakasabhai Subburathnam. He was born to Kanagasabai Mudaliar and Lakshmi Ammal. He received education in Tamil grammar, Tamil literature and Siddhanta Vedant under well-known scholars. He later attended College Calve located in Pondicherry.

Bharathidasan started his career as a Tamil teacher in Karaikal which was a French territory. He was also a member of the India Independence Movement where he actively participated. He used his writings to oppose the British and the French government. His sentiments led to his arrest and imprisonment by the French government. He was inspired by political leaders such as Annadurai, Karunanidhi. After his release, he was elected to the Puducherry Legislative Assembly in 1955.

Bharathidasan married Pazhani Ammal with whom he had four children Saraswathi, Vasantha, Ramani, and Mannarmannan. He died on April 21, 1964, in Madras. He remained a writer until his death.