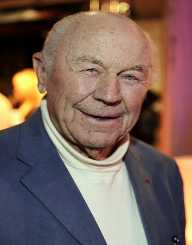 Chuck Yeager is a former American test pilot and Brigadier General born on February 13th, 1923. He is best remembered as the pioneer of breaking the sound barrier in October 2012. Chuck Yeager used the Bell X-1 during this test. Chuck’s first career was in the US Army Air Forces. Gradually, he rose to the ranks and became P-51 Mustang fighter pilot. This was at the time of the Second World War.

Chuck Yeager was born on February 13th, 1923. His place of birth was in Myra, West Virginia in the U.S. His parents were Albert Yeager and Susie Mae. They were farmers. His two brothers were namely Hal Jr. and Roy. Dorris Ann his sister passed away when she was two years old. Pansy Lee is his other sister. The name Chuck was initially a nickname but with time became part of his names. Steve Yeager the former baseball batcher is his cousin.

Chuck Yeager attended high school in Hamlin situated in West Virginia. He graduated in 1914. Between 1939 and 1940, he went to Citizens Military Training Camp situated at Fort Benjamin Harrison in Indianapolis, Indiana. This marked the beginning of his military experience. He was still a teenager at the time.

After his graduation in 1941, Chuck Yeager became a member of the United States Army Air Corps as a private. His natural talent as a pilot in addition to his sharp vision led him to be accepted for flight training when Second World War broke out.

In 1943, he rose to the position of Flight Office immediately after finishing his classes. His initial training was of a fighter pilot. He was with the 357th Fighter Group and flew Bell P-39 Airacobras.

During the Second World War, he flew an approximate of 64 combat missions. During this time, he put his great leadership and flying skills to use and brought down a total of 13 aircraft of their enemies.

His skills made him rise to the rank of second lieutenant and captain by 1945. He then became a test pilot in the U.S and also repaired aircraft. When the war ended, he joined the U.S. Army Air Forces –USAAF where he served as a test pilot and flight instructor.

In October 1947 Chuck Yeager flew the Bell XS-1 at a 45,000 ft altitude and broke the sound barrier. No one had ever broken the barrier in the history of the US; hence he made history that year. In 1962, the USAF Aerospace Research Pilot School appointed him as its first commandant.

Later in 1969, he rose to the rank of brigadier general. At the same time, he was made the Seventeenth Air Force’s vice-commander. After that, in 1971, he served as Pakistan Airforce advisor till 1973. Eventually, in 1975, he retired from active service from the Air Force.

In 1976 Chuck Yeager was presented with the Congressional Silver Medal. This was in honor of being the first person ever to break the sound barrier. In that year, he also earned himself the Collier Trophy

Later in 1997, Chuck Yeager received the Tony Jannus Award for his contributions in the scheduled commercial aviation.

In February 1945, Chuck Yeager tied the knot with Glennis Dickhouse. The couple was blessed with four children. Glennis inspired the name “Glamorous Glennis” which was Chuck’s experimental, supersonic plane. Sadly, he lost his wife in 1990.

In 2003, Chuck Yeager married for the second time to Victoria D’Angelo, an actress. However, his children from his first wife did not acknowledge this union. Seemingly, they though Victoria married their father only because he was a wealthy man.